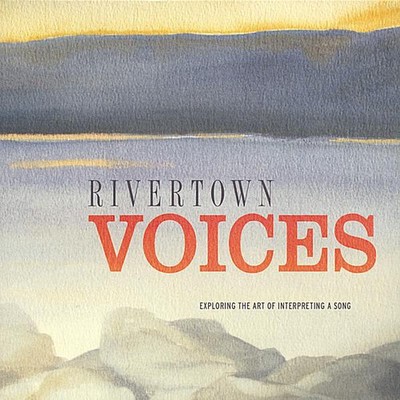 Welcome to Garagista Music. 'Garagista' is Italian slang for someone who makes wine, literally or figuratively, in his (or her) own garage. It's a labor of love - infused with passion and homemade flavor. The same goes for music. With their proximity to New York City and physical beauty, the lower Hudson Rivertowns have always attracted artistic types. Even folks with serious 'day jobs' indulge their Inner Muse. So we opted to celebrate this vibrant local scene by creating our own label -- and Garagista Music was born, with a mission is to showcase artists through online and local distribution. RIVERTOWN VOICES showcases the prodigious vocal gifts of our local singers. Whether it's a jazz standard, a Broadway gem or something beyond category, each performance conveys a passion for bringing songs to life. We hope you enjoy this virtual visit to our corner of the world. Here's what you'll hear in this collection: 1. REMEMBER (Nicole Pasternak and Ralph Lalama) Singer Nicole Pasternak and sax player Ralph Lalama are a big favorite around the Hudson Valley and New York City venues like Birdland and Tavern On the Green. The two mine the always-rich American songbook with phenomenal skill. Nicole has been compared to Ella and Peggy Lee, while her partner, Ralph, effortlessly swings on the tenor sax. This is small-combo jazz at it's best. 2. ALL THE THINGS YOU ARE (Robert Lindner) A stealthy bass line slinks around vocalist/pianist Robert Lindner's voice in his interpretation of this classic. A Hastings-on-Hudson resident, Lindner is a regular at area jazz shows and has also worked in film and TV projects (including Woody Allen's Hannah & Her Sisters). Lindner also works as a music therapist and educator. 3. GOOD OLD DAYS (Lisa Lynne Mathis) Singer Lisa Lynne Mathis draws upon a wide range of influences, from her early love of Broadway and her involvement in worship music, to her work with indie rocker Liz Phair. Possessing a vocal style reminiscent of Shawn Colvin, she delivers her original songs with a no-holds barred punch that sweeps you right up with her. 4. I'M PUTTING ALL MY EGGS (Loryn Altsher) A Boston transplant, Loryn Altsher began her professional career at 17 (!). Don't let her light, sure touch fool you - she's won several prestigious vocal competitions including SRT's 'Women In Jazz.' Backed by her stellar band, she brings a swinging, 'over easy' attitude to this old chestnut, previously covered by Louis Armstrong and Fred Astaire, among others. 5. ALL OF ME (Shavonne Conroy, backed by Daddy-O) Shavonne has spent much of her life on a stage, playing lead roles in productions of Evita, Cabaret and more. She's also headlined at swanky spots like The Waldorf-Astoria and The St. Regis, and done TV gigs including Letterman, Law & Order and All My Children. Possessed of a powerhouse voice and the guts to let it loose, she transforms this standard into a blues-drenched cry that would make Janis Joplin or Billie Holiday proud. 6. NO REGRETS (Sauce) This 'secret' Sauce is made up of singers Michael Wilson and Beth Rudd. Wilson has performed with the New York City Opera, while Rudd is a classically trained pianist who co-founded the rock band Housewives on Prozac. The duo strive to boil a song down to it's essence, keeping it focused on the sounds made by a single guitar and two voices. Simple, poignant and heartfelt, it's a satisfying formula. 7. SOLLA SOLLEW (Rebecca Spencer) Her pleasing, crystalline voice is perfectly suited for the stage - so it's no surprise she's performed in over 60 opera, regional and Off-Broadway productions. Rebecca Spencer is also an original cast member of the hit Broadway show, Jekyll & Hyde. She's also been a soloist for composer Marvin Hamlisch, so she knows how to deliver a song, like this one from Seussical the Musical. 8. YOU (Nicole Pasternak and Ralph Lalama) From the opening bars, Nicole Pasternak and Ralph Lalama put the hoodoo on your toes, which become powerless to avoid tapping. The irresistible rhythm, Nicole's sure touch on the lyrics and Ralph's skilled accompanimentmake this a shot of espresso in a decaf world. 9. I'M CONFESSIN' THAT I LOVE YOU (CatDaddy Jones) A charming instrumental among all the big vocals, this Django Reinhardt-inspired track features Steve Merola on harp (harmonica) and Dee Meyer on a very gypsy-flavored guitar. CatDaddy Jones features several long-time pros, with decades of wide ranging experience. You can also hear them on the Garagista 'Rivertown Rock' CD, proving just how versatile these guys are. 10. BLACK COFFEE (Robert Lindner) We've always been partial to Peggy Lee's take on this song, but vocalist/pianist Robert Lindner has joined her on our short list of favorites with his version. With a smooth, effortless style, he turns the blues-y track into a little bit of film noir. Just try not to picture that blinking neon sign and burning cigarette. 11. I SEE YOUR FACE BEFORE ME (Loryn Altsher) She works as a music therapist, and we must say, Loryn Altsher and her band are good for whatever ails you. This is one of those songs that just washes over you with a delicious mix of piano, bass and voice. Listen to it twice, and then call us in the morning. 12. BROKEN WORLD (Lisa Lynne Mathis) If Pessimism and Cynicism are the twin illnesses of our time, singer Lisa Lynne Mathis offers up a cure. This poignant, uplifting track reflects her own joyful, optimistic outlook. Go ahead, don't be too hip for the room: let her fabulous voice and uplifting words give you a shot of hope. 13. HOME SWEET HEAVEN (Rebecca Spencer) Rebecca Spencer unleashes a classic 'encore.' Between the hyper-articulate lyrics and steady build-up to a rousing climax, this is a textbook example of musical threatre-style exuberance. Indulge yourself in this flight of musical imagination.

Here's what you say about
Garagista Music - Rivertown Voices.