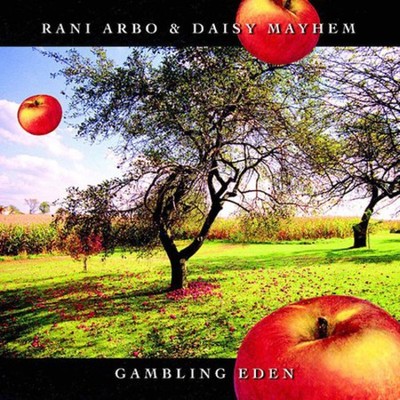 What band would pluck a two-hundred-year-old Georgia Sea Islands song about Death, dress it up with fiddle, guitar, standup bass and four part harmonies, and stand it atop a tin can groove that owes allegiance to the Meters? Meet Rani Arbo & Daisy Mayhem. This percussion- and vocal- driven string band fearlessly mines American musical idioms in the service of an exquisite and highly original gumbo. With Gambling Eden, the band's sophomore CD on Signature Sounds, Rani Arbo and Daisy Mayhem create a sound that is as fresh and unusual as it's roots are deep. Gambling Eden was recorded at the Clubhouse in Rhinebeck, New York, during two record snowstorms in January and February, 2003. As snow piled up around the 1800s farmhouse, light and music spilled out from within, and the chase was on. The band - Arbo (fiddle), Anand Nayak (guitar), Andrew Kinsey (bass) and Scott Kessel (drumset and junk percussion) - was in pursuit of a recording that would retain all the grit, soul, tone, and intensity of the best roots music. The Gambling Eden song list includes centuries-old songs from the Georgia Sea Islands and the Appalachians, original folk/pop and swing tunes by Arbo and her bandmates, modern ballads by Dave Carter and Chris Moore & John McGann , and a 100-year-old protest song by Fiddlin' John Carson. Under the watchful eye of engineer Paul Antonell and producer Dirk Powell, Daisy Mayhem brought those disparate songs into the musical space they call home. 'Dirk guarded the soul of this project,' says Arbo. 'He didn't let us overthink it, and he kept us swimming in the middle of the stream, both musically and emotionally. He brings both the gravitas of a traditional musician and the adventurous ears of a modern player, and he helped us to straddle that divide with a sense of fun and integrity. He was incredibly inspiring.' In the lush sonic landscape of Gambling Eden, Kinsey's fat upright bass and Kessel's powerful grooves get a front seat, thanks to Grammy-award winner Tony Daigle's mixes. Guests on trumpet, trombone, harmonica, and pedal steel add to the palette, and Powell contributes on clawhammer banjo, button accordion, oragn, mellotron, tack piano, and mandolin. Throughout, Nayak's tasteful guitar fills out the groove, exploding into gutsy solos, and Arbo's slippery fiddle is growling and sweet by turns. The vocals - always the hallmark of this band - are sublime. Arbo's mesmerizing alto has garnered praise for over a decade ('Don't even bother trying to resist her,' says Acoustic Guitar magazine). She's at the top of her game here, switching between a whisper, a holler and a croon in the blink of an eye. Kinsey and Nayak offer up beautiful vocals on their originals and covers, and the group's four-part harmonies come off like a rich, peaty, complex single-malt Scotch. Alternately introspective and playful, Gambling Eden is a place where characters from all epochs mingle to explore the risks and consequences of being human. In 'O Death,' Arbo bargains with the scythe-bearer who comes knocking; in 'The Farmer is the Man,' Kinsey tells a 100-year old story about how easily we betray the hand that feeds us. In 'Closer,' Nayak sings an achingly existential ballad; and in Arbo's original, 'Eve,' the First Lady of Eden questions the true nature of Paradise. It's not easy to put this band - or this CD - into a nutshell. In the liner notes to Gambling Eden, Powell quips, 'I can't describe this music any more easily than I can corner a cougar. It snarls, it laughs, it soars, it waddles, it sprints, it kisses, it mourns, it winks. It doesn't abide narrow definitions.' The most important thing to remember is that it's great music, and that no one else is playing it quite like this. Lay your bets and sign on for a surprising ride.

Here's what you say about
Rani Arbo - Gambling Eden.