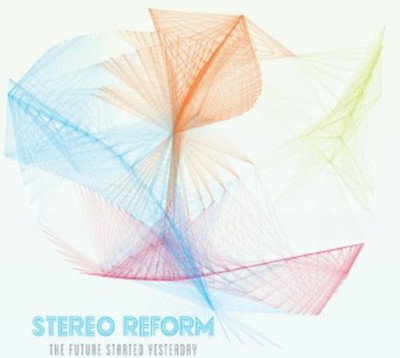 Stereo Reform's newest album, 'The Future Started Yesterday,' brilliantly combines genres to produce a killer modern sound that will appeal to any ear. This high-energy album introduces a new dimension to the Stereo Reform sound, featuring colorful lyrics, more mature themes, and a heavy dose of dance-pop infused with a taste of funk. Anchored by songs such as The Future Started Yesterday, Fire, and 10 Miles Out Of NYC (which was featured in Relix in 2011). This album boasts ample drums that give way to crisp guitar riffs and electro-influenced backbeats. Produced by the Grammy-nominated Bravo Ocean, The Future Started Yesterday offers a fresh, sexy, modern sound that is wholly unique, yet feels somehow familiar. This dynamic sound is the result of a mixing of genres, and many of Stereo Reform's most esteemed influences like Red Hot Chili Peppers, Michael Jackson, Phish, Prince, Pink Floyd, The Beatles and more are paid homage in the tracks of this album. The Future Started Yesterday is Stereo Reform's sophomore album, featuring a more refined version of their signature sound. With the 2008 release of their first album, Robots of Evolution, Stereo Reform introduced the world to what they call, "Dance-a-Funk-a-Rock-a-Tronic." A true synthesis of genres, Stereo Reform engineered Dance-a-Funk-a-Rock-a-Tronic by taking the loosely definable "rock" sound and blending dance, funk, and pop into the mix. This meticulously crafted and totally unique sound continues to evolve, which is evidenced in the innovative flare of their newest album. Stereo Reform is the product of the fusion of the creative talents of Neil Turner on bass, keys, and lead vocals, and Will Evans on guitar, keys, and backup vocals. Evans' structured approach and technical mastery, combined with Turner's raw, unfiltered energy and gift for penning memorable lyrics integrate seamlessly to create Stereo Reform's unique sound. Originating in Charleston, SC, Stereo Reform made the move to Los Angeles, CA shortly after forming.Following their time in LA, the band embarked on a cross-country tour for the next year, finally settling in Greenville, SC to hit the studio once again. In 2009 Stereo Reform made their way to the Whitestone Studios, owned by Edwin McCain, to record The Whitestone Session. In addition to that demo, the band also recorded Party Light 25. In April of 2012, Stereo Reform traveled to Namaste Studios in Atlanta, GA to work with Bravo Ocean and Triangle Sound Studios, owned by acclaimed producer Tricky Stuart. Having worked with numerous well-known artists, including Katy Perry, Beastie Boys, Mariah Carey, and others, Bravo Ocean's production team helped Stereo Reform hone and capture their unique sound and infectious energy on the innovative The Future Started Yesterday.

Here's what you say about
Stereo Reform - Future Started Yesterday.