Brian Fitzpatrick - Further Down the Line 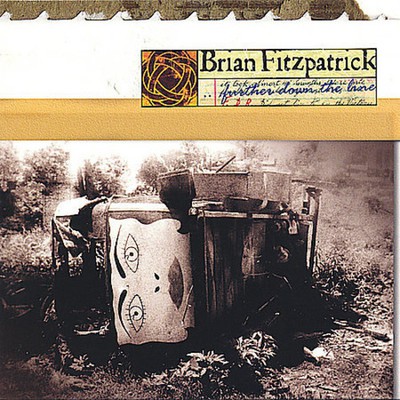 'She was barefoot and it was November...kinda struck me, I guess.' So goes NJ singer/songwriter Brian Fitzpatrick's explanation behind 'Madonna In Rags', the opening track from his fourth and latest album, Further Down The Line. In a broader sense, however, it might be said this quote offers a concise explanation of the album and it's purpose as a whole. Comprised of a dozen character-driven songs, much of the work's focus is on introducing the listener to a band of society's lost - and/or those who one day could be. On the gently melodic 'Valhalla', for example, Fitzpatrick recalls a childhood friend, who was murdered after a long stint in an abusive drug treatment program. 'She was a big influence on me musically and spiritually,' Fitzpatrick says, adding, 'it's not a song I like to play but I do it as a reminder and because of a promise I made.' Similar forces drive a second of the album's ballads, 'Across The Water.' Written for another friend, this one sexually abused, the song is 'an examination of her situation, and a man with good intentions who loves her and just can't understand it...unfortunately, I think the theme of abuse reared it's head several times on this record. Not really songs I like to write.' As one might expect, someone exploring such deep topics also needs a bit of emotional and artistic relief...as do, quite arguably, his listeners. And, this relief Fitzpatrick deftly delivers in the form of mid-tempo numbers such as 'Shoot The Moon' (featuring guest vocals from Garth Kravitz), the piano-driven 'Far From Thee', crunching rocker 'Drunk In Vegas' and the longtime live (full band) show standard, 'Sweet Maria Reprise' - a song, incidentally, which also appeared on his prior album, State of Grace. With regard to the last of these Fitzpatrick says, 'We had a lot of questions from fans as to why this was never released like we played it live...well, now it is!' Fitzpatrick spent his early twenties touring Europe and the U.S with various hardcore bands - a pursuit that proved highly successful on a material level, but one that left him, on a personal plane, feeling strangely unfulfilled. As a result, Fitzpatrick abruptly quit the hardcore scene in 1997, and by 1998 had already discovered his Other Side - a collection of personal reflections and a mix of musical styles that became his debut album. A wave of local appearances and a second album followed (When I Bleed, 2000). Yet, despite this modest success and an ever-growing fan base, before heading into the studio with the songs for his third effort, Fitzpatrick felt some changes were in order to more adequately translate his live performance quality into his recorded work. Toward this end, he teamed with producer Jerry Jones (The Fiendz, Factoids, Plug Uglies) and engineer Tim Gilles of Jersey City's Big Blue Meanie Studios (Mighty Mighty Bosstones, Sebastion Bach, Susanna Hoffs) to create his artistic breakthrough, State of Grace, released in March 2002. And it is this team, along with the now firmly established band lineup of Fitzpatrick on guitar and vocals, Jay Forsythe on bass, Rich DeCicco on drums, and Ed Fritz on keyboards and accordion, that have come together once again to create this latest work...a work that fully explains why Rolling Stone declared Fitzpatrick 'a writer to keep an eye on', and a musical adventure sure to prove rewarding for all who care to journey with him...Further Down The Line.

Here's what you say about
Brian Fitzpatrick - Further Down the Line.