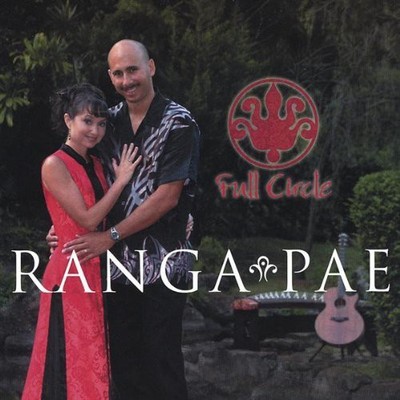 A refreshing, intimate, and eclectic fusion of east and west, ancient and modern that includes contemporary songs performed on world instruments, Hawaiian chant, a hip-hop koto rendition of a jazz standard, Brazilian samba, and sounds from nature. Using mainly acoustic instruments, this CD has an organic sound as if the musicians were performing for you in the intimacy of your living room. In blending different cultures and musical traditions, Ranga Pae strives to fulfill the meaning of their Maori name: Encircling the Earth. Full Circle features Jody Huybrechts on Japanese koto, guitar, flute, bass, and Cambodian gongs, with Kimo Huybrechts on vocals, guitar, sitar, Hawaiian slack key guitar, Hawaiian nose flute, bamboo flutes, and Javanese bird whistle, and with special guests Luiz Diaz on Brazilian percussion and Daniel Paul on tabla. In addition to many of their own compositions ranging from Breathe In (a song that evokes a peaceful garden setting as the gentle sounds of the nose flute and koto float over the wind and temple gongs in the distance) to 'Ehiku Samba (a joyful samba that grooves in 7/8 time), Ranga Pae does some surprising covers including a Japanese/Indian flavored version of Jimi Hendrix's 'Purple Haze' featuring the koto and tabla, and a rendition of Carlos Santana's 'Europa' on koto with Brazilian percussion. Ranga Pae was formed on the Big Island of Hawaii in 1995 by the husband and wife duo Kimo & Jody Huybrechts. Residing on the island of Maui, Kimo & Jody can be heard at Merriman's in Kapalua. JODY HUYBRECHTS was born in Massachusetts and raised in Los Angeles. She began studying guitar at the age of nine, and flute when she was eleven years old. She fell in love with the koto after seeing the Japanese-American jazz band Hiroshima in concert as a college student. After graduating from UCLA (B.A. Cultural Anthropology with an emphasis in ethnic music), she taught English in Miyazaki, Japan. She studied koto with grand master Mutsuko Miyata in Japan, and later with Dr. Bernice Hirai in Honolulu. KIMO HUYBRECHTS was born at Fort Bliss in El Paso, Texas and raised in California, Singapore and the Big Island of Hawaii. Of Dutch, Indonesian, French, Chinese, and Hawaiian ancestry, Kimo was exposed to ethnic music at a young age. Kimo's musical studies began with guitar, then he became interested in bamboo flutes while traveling through Indonesia. After graduating from Pitzer College (B.A. Cultural Anthropology with an emphasis in ethnomusicology), he moved to his parents' farm on the Big Island where he learned the art of building and playing Hawaiian nose flutes and other native Hawaiian instruments from Kumu Hula Lanakila Brandt. He plays the 'ohe hano ihu (Hawaiian nose flute), the 'lakohachi' (a hybrid of a Japanese shakuhachi and a Lakota Indian flute), the Javanese bird whistle, and the suling (a Javanese end blown bamboo flute). The KOTO is a thirteen-stringed zither with a harp-like sound made of a hollow piece of paulownia wood measuring just over six feet in length. The strings are plucked with ivory plectrums called o-tsume which are worn on the thumb, index, and middle fingers of the right hand. The strings are made of tetlon and are stretched over notched, moveable bridges called ji, enabling the player to tune to any Eastern or Western scale. The instrument originated in China and was brought to Japan around the 7th century and used as a court instrument until the late 12th century. After the decline of court life, it was played by priests and noblemen, then for a time was played exclusively by blind men. Vocal accompaniment was added in the late 16th century and was performed only in temples. By the end of the 17th century the instrument was introduced to a wider segment of society, including women, and began to be played with the shamisen (three-stringed lute). The instrument was brought to Hawaii with the arrival of Japanese sugar plantation workers in 1868. Full Circle, released in 2004, is the second album by world fusion artist Ranga Pae. Like Rain (1997) and Waihua (2009) are also available through CD BABY.

Here's what you say about
Ranga Pae - Full Circle.