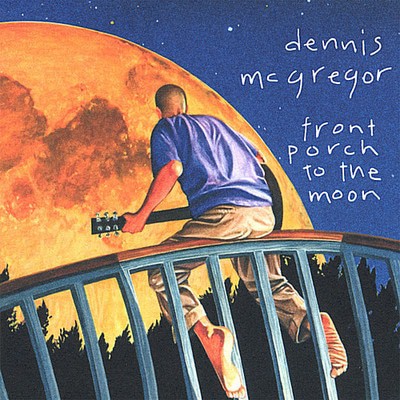 'Dennis McGregor is a clever, captivating, crackerjack songwriter with a keen wit and a keen ear. His sweetly sardonic, ruefully wry observations on the human condition make me laugh, ache, think, and sing along. ' Arden Eaton Monterey Bay DJ and Television Producer KPIG, Arden's Garden -Dennis McGregor's 'Front Porch To The Moon' 'Dennis McGregor walked into the KPIG studios and won the entire crew over with his first song. We love him!' -Sleepy John, KPIG 'A few years ago, Dennis picked up the guitar and songs started pouring out of him - songs that revealed a large and deep world churning inside the calm exterior of this tall, quiet man. The songs range from heartfelt and poignant to... well, not just off the wall, but off a wacky wall that may exist in another universe. If you can appreciate depth of thought, sly humor and a quiet, modest, down to earth genius, come enjoy a unique and rare American treasure.' - Matt Kramer, Frogsong From pretty island rhythms, to raw blues, to pure country, to simple stories of small town life that no one has ever told before ("It ain't easy bein' married to a cop...", e.g.), there's no way to compare Dennis McGregor to anyone else. You could try. You could call him a cross between Greg Brown and Jimmy Buffet, for instance, but that wouldn't get at the heart of the kinds of songs he writes, the way he sings them, or what he's really about. What is he about? It seems to me that what sets McGregor apart is his penchant for keeping a detailed, musical record of the way life can careen from tragedy to comedy and back again in the blink of an eye. His music is about seeing the other guy's point of view, about being human and learning to live with it, whether you're waking up toasted or coming down a hill too fast on a bike. It's like most people's lives, only set to music, with memorable lines, and the feeling that you've heard it all before. Of course you have. He's not just singing about his own life, he's singing about yours as well. Avon mystery novelist, Lee Charles Kelley.

Here's what you say about
Dennis McGregor - Front Porch to the Moon.