Beverly Serra-Brooks - From the Musical Tree 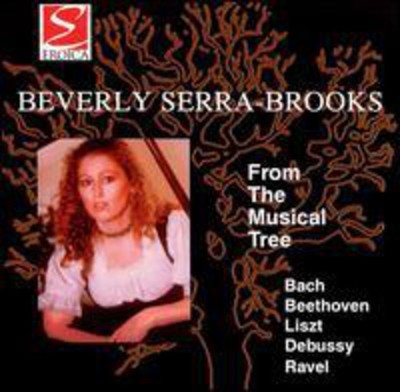 MUSIC ON THIS CD: From the Musical Tree Chromatic Fantasia and Fuge BWV 903 in d moll J.S. Bach (1685-1750) The Chromatic Fantasy, originating in Cothen, Germany around 1720 is representative of his greatest work in the form of Toccata and Fantasy writing. Even today in the year 2000- the 250th anniversary of Bachs' death, it stands as one of the highpoints in all piano repertoire. The fantasy features virtuoso passage work, chromatic harmonies, instrumental recitative writing reminiscent of vocal recitative in early Baroque opera, and use of improvisational techniques. The Fuge is built on an ascending theme. The clear contrapuntal texture is contrasted with episodes derived from rhythmic and intervallic cells of the theme. In this piece, Bach was able to fuse Baroque texture and form into a romantic palate of color and mood. Sonata Opus.57 f moll LV. Beethoven (1770-1827) There is a revolutionary spirit as well as an autobiographical feel to this sonata. Written in 1803-04 when Beethovens hearing was deteriorating, the first movement incorporates Beethovens 'fate' motive as in his fifth symphony to work through his despair at losing his hearing and is filled with alternations of lyricism and bold outbursts. The second movement is a gentle set of variations acting as a bridge to the explosive finale filled with power and virtuoso passage work in one last run from his fate. Un Sospiro F. Liszt (1811-1886) The romantic era developed the etude - or study into a fusion of beauty and lyricism as well as for refining a virtuoso technique. In this favorite study, Liszt blends technical display with atmosphere and passion. Images Book I C. Debussy (1862-1918) Debussy's unique style reached it's mature perspective with this suite written in 1905. 'Reflect dans L'eau' (reflections in the water) centers around his fascination with creating an impression of water, it's movement and the reflections of light upon water. This new way of writing for the piano utilizes pentatonic and whole tone harmonies shrouded in limpid dynamic hues of pianissimo and special pedal effects to create color and an atmosphere of shifting patterns of light. 'Hommage a Rameau' is a serious gesture of admiration for the famous composer, Rameau. The final Movement is a fun, if not hectic romp around the piano. The visual excitement of the' Movement' is also created by overlapping and crossed hands toccata technique that Debussy expanded and then became a feature of his technical style, new harmonies and sweep. Jeux d'Eau M. Ravel (1875-1937) Whereas Debussys' writing is more like Chopin, Ravel seems more like Liszt in his compositional writing, yet they were both interested in depicting the elements of water,light and motion in sound. In the tone poem Jeux d'eau, he evokes elasticity and sensuality through his harmonic language and exploitation of the upper registers as he creates in sound the stillness and movement of water. The subtitle helps to set the mood -- the river god laughs as the water splashes over him. THE ARTIST A favorite with audiences for her sensitive and exciting interpretations, Ms. Serra-Brooks hails from a long line of Romantics. A winner in the 1997 Artists International Competition, Ms. Serra-Brooks made her New York Recital Debut at Carnegie Hall on January 11,1998. Beverly made her west coast Debut in 1993 at the Japan-America Theater in Los Angeles and since then has been performing in concert halls across the United States. Ms. Serra-Brooks concertized in Paris, France this past summer and has recently performed at Johns-Hopkins University in Shriver Hall, as Guest Artist in the Carmel Performing Arts Festival in northern California and in a live recital over KUSC radio from the Bing Auditorium in Los Angeles. American Pianist Beverly Serra-Brooks has also been a Guest Artist on the List-Glen Festival Young Artist Series, Kawai-America & Cerritos College subscription series, Fullerton Symphony Concert Series, Prescott College Elks Theater 90th Anniversary Series, Verde Valley Concert Association Series and Gila Valley Concert Series in Arizona. Ms. Serra-Brooks is a winner of numerous prizes and awards including the Harpo Marx, James Irvine and Pillsbury Foundations Music Awards, the Music Arts Club, the Simone Belsky Piano Competition and Fellowships from the International Institute for Chamber Music in Germany and the Music Academy of the West. Beverly is a recipient of an American Conservatory at Fontainebleau, France Performance Scholarship, where she was featured in the famed Salle du jeu de Paume Recital Series. Ms. Serra-Brooks was recently featured on National Public Radios program 'Performance Today' in an Interview and Performance of her One Woman Piano Histro-Drama about the life and performances of Clara Schumann entitled 'Clara Schumann at the Piano.' This cutting edge mix of Theater and Recital has received standing Ovations wherever it has been performed including Spreckles Theater in San Diego, the Historic Lobero Theater in Santa Barbara, Los Gatos and Arizona State University. Ms. Serra-Brooks' performances have been featured on Air-Canada International flights as part of their 'Concert Hour' entertainment channel and her current tour schedule includes concerts in Wisconsin at the famous Mabel Tainter Theater, Florida, Bently College in Boston and New York's Sullivan Performing Arts series, among others. A Pasadena Ca., native, Beverly has concertized in Austria, Germany, France and across the United States as well as Guest Artist appearances in the American New Music Consortium's Concert Tour of Italy. Beverly's piano coaches include James Shearer in Pasadena, Dr. Reginald Stewart at the Music Academy of the West, Leonid Hambro at California Institute of the Arts where she received her BFA, Michel Beroff and Idil Biret at the American Conservatory at Fontainebleau, France, an M.M. at California State University at Northridge and in Austria with Jorg Demus. Ms. Serra-Brooks is frequently invited to Adjudicate,give Masterclasses & guest Artist residencies at Colleges & Universities and is especially noted for her enthusiastic rapport with students. Beverly is also a faculty member and Judge for the American college of Musicians, an Executive Board member of MTA, and the College Music Society.

Here's what you say about
Beverly Serra-Brooks - From the Musical Tree.