Jocelyn Velasco Hoskins - From the Heart 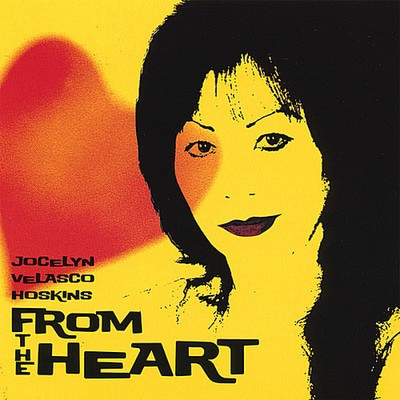 I was born in the Philippine Islands and moved to the United States at age 7.We moved to an artist influenced town called Woodstock,New York. With Bearsville Recording Studio in town, many famous musicians came to town and played local clubs and cafe's. Being around artists and musicians all my life made an influence on me. I came from a very musical family. My father played piano and had a passion for music. He loved all types of beautiful music. From classical,big bands,latin,Frank Sinatra,Gershwin all types. I sang in choir since age 8. Played guitar since age 10.I studied composition,voice, and music theory in Alameda Calf. One teacher influenced me with Billy Holiday and the Motown sound then R&B.But I played in many Rock and Roll bands.Some were all female. My sister and I were in a dance company doing native dances from the Philippines. Our mother was our manager. I was only 9 years old and a child performer on television and stage. At age 15 I saw Bonnie Raitt perform. I was very influenced by her blues and the way she played electric guitar and slide. Janis Joplin,Bob Dylan,Fleetwood Mac,Shania Twain and Heart( the Wilson sisters really blow me away!) also influenced me. I played in all types of bands.I also soloed quite a bit. I was a fashion designer for the famed Suzy Creamcheese in Las Vegas. Through her I dressed many famous entertainers such as Ann Margaret,Diana Warwick,Shirley Maclaine,Tanya Tucker the Mandrel sisters {when they had their TV show}. In Oct. 2006 I met guitar player Butch Davis with producer and keyboardist Billy Anderson while looking for a studio in Nashville. These two 'magicman'{ as I call them} knew exactly what my songs needed to complete. We had such a blast recording 'From the Heart'. We used Vintage collectible guitars for different songs on the CD. One of them belonged to Waylon Jennings. Butch was the guitar player for ten years with the country singer Tracy Lawrence. He also played with Stonewall Jackson,Billy Walker,and Razzy Bailey. Billy has been a keyboardist for over 35 years. Billy has also played with Stephen Stills and Papa John Creach. I felt and still feel so honored that these two incredible musicians are on my CD. They helped me put together my first album after not being in a studio in 15 years!There seems to be a wave of artist from my time in music, coming back. Music has evolved into a new sound. This new sound is composed of a little of all types of music. The mood is similar to the 60s and 70s. Anti war, love, humanity, family values. Only if you have really experienced real life and love will you understand what some of my songs are saying. There are a variety of tempos. The songs are about the lessons in life that we all go through. Nashville reminds me of Woodstock and Austin, Tx. The people understand the music business and are very willing to help. Such an endless source of talent there! I guess the best words to describe my music style is, soulful,Classic Rock,Blues with Country roots. From the heart. Electrifying guitar rifts,piano,organ,strings combined with poignant lyrics. Some of us can not express some emotions as easily as a song sometimes can. You can be in the worse mood, play a good song and it changes your frame of mind! From my heart to yours,God Bless! I hope you enjoy the music.

Here's what you say about
Jocelyn Velasco Hoskins - From the Heart.