Cuts - From Here on Out 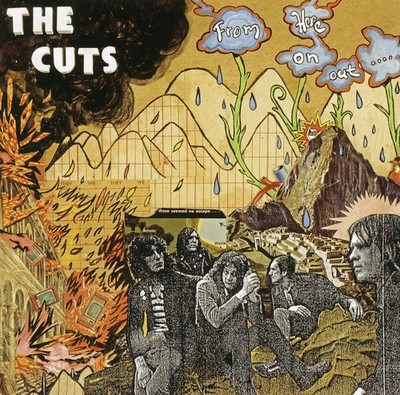 They say the third time's the charm and on the Cuts latest, from Here on Out, the group delivers on the promise hinted at the first two times around. This album is the perfect distillation of garage pop, proto-punk, power pop, '70s glam and West coast jangle. Secluding themselves in a remote recording studio in Northern California for a lengthy stay with producer Matthew Smith (Outrageous Cherry), the quartet came up with an album that perfectly encapsulates everything the band is about. It's a perfect rock n' roll record, with sweeping, swirling guitar lines, a deep groove, great melodies and hooks aplenty. Andy Jordan yelps 'n' gulps like a less angst-ridden Richard Hell (or a less precious Tom Verlaine) while the band cranks out songs overflowing with lavender keyboards, Raspberries-esque harmonies, chiming guitars and shuffling, danceable up-beats. You know, that lovely stuff that smokes 'n' boogies, too, just like they used to make. From Here on Out is a stunning collection showcasing the band's delightful tunefulness on a range of fine tracks. But despite their obvious songwriting savvy and overt pop leanings, the Cuts pound away in such a non-wimpy manner that there's no question what they're making is genuine rock 'n' roll music. They might just be the best exemplar of this kind of tuneful dynamism since the '70s heyday of artists like Nick Lowe, the Talking Heads, Sparks and the Shoes. Indeed, the Cuts could easily be destined for the same kind of mass appeal.

Here's what you say about
Cuts - From Here on Out.