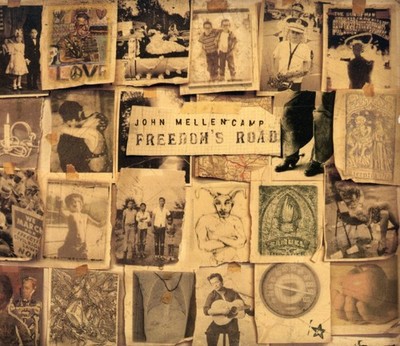 Freedom's Road, the culmination of a year's worth of composing, arranging, recording and mixing is a collection of songs that reflect the climate and concerns of present day America. Lyrically, the album is not overtly political but offers an insightful, plain-spoken perspective on contemporary conditions. The lyrics, contemplative and hopeful, are set off by the garage-born organic sound of Mellencamp and his band. Band members participating in the sessions for Freedom's Road included Mike Wanchic (guitar, vocals), Andy York (guitar, vocals, flute-a-phone), Miriam Sturm (violin), John Gunnell (bass), Dane Clark (drums), and Troye Kinnett (keyboards). The album's tone and themes are underscored by such Mellencamp-penned originals as 'Ghost Towns Along the Highway,' 'Rural Route,' and 'The Americans.' of the album's title track, Mellencamp notes, 'Freedom's Road' is a promise that you have to go through hell to redeem. Billboard called Our Country an appreciable fable of tolerance, hope and empowerment, citing his latest offering as 'a jubilant return.'

Here's what you say about
John Mellencamp - Freedom's Road.