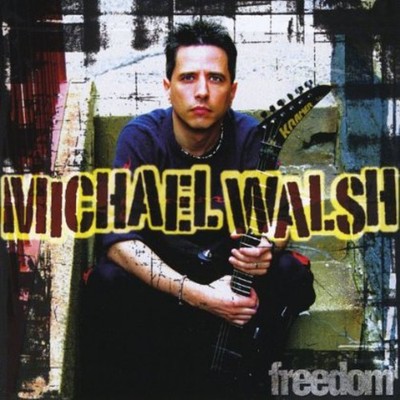 Michael Walsh has just released his latest CD, "Freedom", a hard-rocker spiked with a dash of dance-groove. You'll hear the influence of groups like Creed, P.O.D. and Audio Adrenaline along with a couple of R & B tinged tunes and some soft rockers to round things out. Michael composed and arranged all of the songs on the project. The insightful and reflective lyrics deal predominantly with Christian themes and philosophy. "Mike covers a broad musical spectrum. The majority of his songs are composed of heavy 'Creed-like' riffs. To that he adds a few VanHalenesque solos, some blues, and some nice mellow ballads. He plays virtually all of the instruments on the CD. Mike is one of the most talented musicians in the area." â?? Kahn Evans, guitar player for Vicinity 'Mike is a gifted musician. It's obvious Mike has worked hard to create a musical project that will grab you by the ears and take you for a ride you won't soon forget!' - Gary Kadansky, Host of "Straight from the Heart" on KROC, Executive Director Rochester Area Youth for Christ Michael recorded the CD entirely in his home studio using a Roland VS-1880 18 track hard disk recorder. On the album he handles all of the vocals, guitars, bass guitar, keyboard and harmonica. He programmed the drum parts using a Roland R70 drum machine. The CD also features a guest performance by violist Rachel Kuipers, also from Rochester. Michael has been singing and playing guitar for 27 years. He is married with 3 children, ages 7, 6 and 4. Michael has worked for the last 13 years as a computer programmer for Keane, Inc. He also works for Hal Leonard publishing, arranging guitar parts. He volunteers as a leader/guitar-player for Young Life, an international Christian ministry which seeks to share the gospel with teenagers. Michael attends Calvary Evangelical Free Church in Rochester. Besides music, his hobbies include reading, exercise/sports, learning Italian and watching movie classics.

Here's what you say about
Michael Walsh - Freedom.