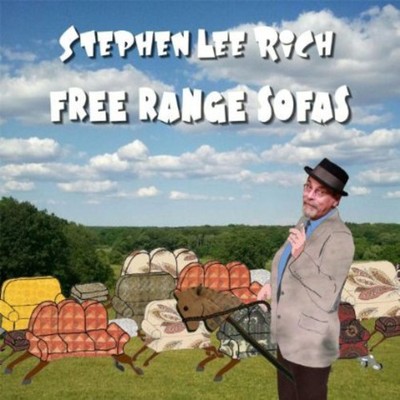 Stephen Lee Rich has, in his forty year career, been a folksinger, stand-up, comic, country singer, songwriter, and master of ceremonies for countless events. For the last ten years he's worked as the back half of the duo Andina and Rich. This EP, 'Free Range Sofas' re-establishes him as a solo act. It brings together his various talents and experiences to create a whole new way to do Acoustic Music because Stephen Lee is, first and foremost, an entertainer. September 1st, 1969 a then sixteen- year- old Stephen Lee Rich entered a talent contest at the County Fair in Mariposa County, California. He won five dollars and a career was born. Most teenage boys would have hung up the guitar after securing their first full time job, but Stephen Lee kept the music coming. Now, over forty years later, he still commands the stage with his combination of folk, country, and original songs mixed with a healthy dose of comedy. Just look at what people have to say about him. "...a great Madison folk musician." Broadjam "Stephen Lee Rich is a one-man variety show." Manitowoc Herald Times Reporter "... a veteran folkie." The Reader (Chicago) "He's good!" WGN Morning News Look at where he's been! Nashville Songwriters Festival Grand Marais Songwriters Festival Gebhard Woods Dulcimer Festival Edgewater Folk and Bluegrass Festival Two-Way Street Coffeehouse Wild Hog In The Woods Coffeehouse Hayner Public Library - Alton, IL And much more. He's done live radio shows, too. Folk IT! - A3 Radio - Ypsilanti, MI Higher Ground - Wisconsin Public Radio Blue Plate Special - WDVX- Knoxville, TN And much more. With the Holidays coming up this EP will make a great stocking-stuffer (especially if you know someone with oddly shaped feet). Get your copy now and write a review.