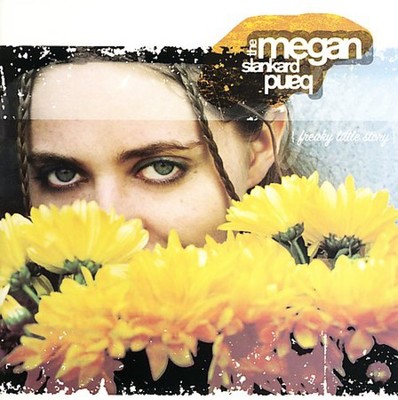 Megan Slankard Biography 2005 'It's a good sign when the first three songs of a record have you wondering 'why haven't I heard of her before?'' Acoustic Guitar magazine writes about 22-year-old California native Megan Slankard, 'Such is the case with Freaky Little Story... Slankard's vocal style is so distinctive that simply naming influences (Ani DiFranco, Alanis Morissette) doesn't do it justice. Her vocal melodies are immediately arresting, she uses hip-hop phrasing and whisper-to-roar dynamics like a pro, and she never let's her impeccable technique eclipse the emotion she pours into her performances.' After the release of Freaky Little Story (2003), Megan appeared on the Learning Channel's What Not To Wear, which generated a flurry of CD sales that placed her in the top ten of both CD Baby and Amazon.com for several months. Because of the episode's popularity (the show's most watched episode), the show's producers will feature her in a follow-up program to be aired in September. Overall Megan had sold 13,000 units of her first two albums (Freaky Little Story 2003, Lady is a Pirate 2001), and she has a third album scheduled for release in September. Her song 'Too Bad You' (from Freaky Little Story) was also included on San Francisco AAA station KFOG's compilation CD, and is in heavy rotation on KOSO in Modesto, KQPT in Chico, and KPIG in Santa Cruz. She has been featured in Rockgrl Magazine, Owl Magazine, The Synthesis, and online sources Fresh Tracks and Women In Rock, in addition to Acoustic Guitar magazine, whose editors named Freaky Little Story one of their top albums of 2005. She was a final selection artist for RPM Direct Presents: Unsigned Artists Volume 3 compilation CD; an A&R Online featured artist; a Song and Film Spotlight artist; and, an Acoustic Cafe featured artist on the 'One to Watch' syndicated radio program (sponsored by the USA Songwriting Competition). Slankard also co-wrote and performed the title track to founding Dire Straits member David Knopfler's new record, Ship of Dreams. She will again perform on his upcoming American/Canadian release. Megan has performed in over 75 cities in five different countries, including at showcases in Boston (NEMO) and Toronto (NXNE), on three tours as support for David Knopfler (Germany and England), at a concert as a finalist for the Pantene Pro-Voice Competition (New York City), and at the international festival InGuitar in Zurich (Switzerland). She is performing with the Modesto Symphony this September. 'She could make the OED [Oxford English Dictionary] sound melodious.' Good Times Magazine.

Here's what you say about
Megan Slankard - Freaky Little Story.