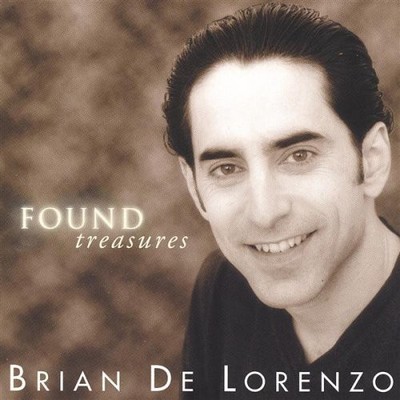 WHAT THE PRESS HAS TO SAY: Although the title of Brian De Lorenzo's Found Treasures refers to the songs it contains, the cabaret singer is one himself. Possessing a clear tenor which he uses with earnest emotional intensity, De Lorenzo sings with complete commitment. Some of his selections may not have been 'lost' to Show Music readers, but the 19 numbers form an appealing program. And where else would you be likely to hear Angel's 'Astoria Gloria' and 'How Do You Say Goodbye?,' Romance/Romance's 'Words He Doesn't Say,' and 3 Guys Naked From the Waist Down's 'I Don't Believe in Heroes Anymore?' De Lorenzo's sincerity makes familiar songs such as Who Will Buy?' (Oliver!), 'Do I Hear a Waltz?' and 'Tonight at Eight' (She Loves Me) seem fresh. -MAX O. PREEO, SHOW MUSIC When a singer has a voice like Brian De Lorenzo, musicians like to say, 'He is a songwriter's best friend.' De Lorenzo brings to the stage an instrument that is not only well-trained but strikingly beautiful. He has one of those rare voices that make first-time listeners stop and say, 'Who is that?' -CHET WILLIAMSON, WORCESTER MAGAZINE Emotional honesty is a cabaret singer's stock in trade, and De Lorenzo has it. He makes every song sound like an account of his own experience and emotions, and he conveys each one with a directness that makes the experience the listener's as well.... De Lorenzo...is a talented music theater artist with an easy-to-listen-to voice, an engaging, emotionally honest style, and an uncanny knack for picking great, little-known songs.... Ask your record store for it, and if they don't have it, tell them they should. -JON LEHMAN, THE PATRIOT LEDGER This young man really impressed us when we were called to judge a cabaret contest at Pegasus... When we caught his debut show at Eighty Eight's...our high expectations were rewarded with an evening that was a delight. Singing lesser known Broadway show tunes intertwined with biographical anecdotes, the evening was indeed memorable... Cabaret demands honesty of it's performers, and Brian never strayed from this requirement. His vocals place him among the best currently appearing on the New York cabaret scene. And his comic timing was not lost on the enthusiastic audience... Brian's radiant charm won our hearts. -STU HAMSTRA, CABARET HOTLINE ONLINE He knows how to get to the heart of a ballad...He builds moments with a sweet earnest quality in both his voice and his demeanor...He's pure cabaret. -LESLEY ALEXANDER, WVOX/WRTN RADIO BRIAN De LORENZO is an accomplished actor and cabaret singer who has performed from Alaska to Israel. He has performed his cabaret shows at venues such as Eighty-Eight's, Don't Tell Mama, The Encore and Pegasus in New York; Piaf's in San Francisco; Scullers, Club Café and The Blacksmith House in Boston; and The Crown & Anchor in Provincetown. He has also performed at the prestigious Mabel Mercer Cabaret Conventions at New York's Town Hall Theatre and at Chicago's Park West. Brian enjoys performing songs that audiences don't get the opportunity to hear very often. More than half of the songs in his cabaret shows 'Found Treasures' and 'More Found Treasures' are from unsuccessful Broadway shows because even a show that didn't have a long run can have wonderful songs. Of course, Brian sings more familiar songs, from the Great American Songbook, as well. Brian earned the title '2001 Performer of the Year' by winning first place in the Adult Solo category at Talent America's 27th 'Talent of the Year Awards' at the New York Sheraton Hotel and Towers, competing with performers from all over the United States. He also received the Talent America Blair Hammond Award for Best Male Musical Theatre - Adult Vocal. Contestants performed for approximately 45 judges who are professionals in the entertainment industry. Brian is a founding member of the Boston Association of Cabaret Artists (BACA) and served as the organization's president for four years. He also served as editor of their newsletter, 'BACA News' for over four years. Brian used to write the column on Boston-area cabaret news for the international cabaret magazine, 'Cabaret Scenes.'

Here's what you say about
Brian Delorenzo - Found Treasures.