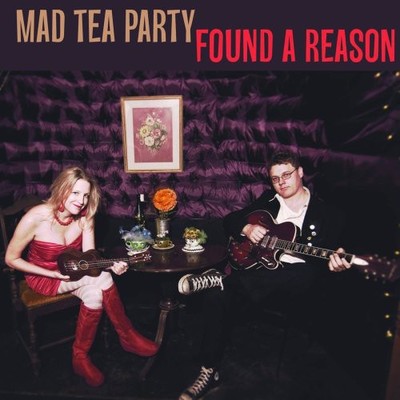 'If The White Stripes and Southern Culture on the Skids mated, had fraternal twins and raised them to rock out with ukulele accompaniment, we would have Asheville, NC's Mad Tea Party. The newly-minted duo's new release FOUND A REASON is playful old school rock that is both straightforward and wonderfully melodic. It's B-52s meets Buddy Holly with a lot more thump; Americana with a funky fire underneath the plaintiveness of Jason Krekel's smooth vocals and Ami Worthen's jukebox-era delivery...FOUND A REASON shows Mad Tea Party to be a band with more to offer than retro artifices. The group takes traditional styles of playing and puts a good, fresh coat of paint on it.' - Southeast Performer 'Mad Tea Party's FOUND A REASON is a delicious juke joint jaunt, with emphasis on the 'uke'. The duo from Asheville plays rockabilly, early punk, old time, and 1960s rock and roll (among others) with a Buddy Holly swagger and the authenticity of 1930s street performers.' - PopMatters "A collection of infectious indie stompers and honky-tonk pop tunes that make sitting still not an option...FOUND A REASON is a jaunty, high-speed romp through the theatrical Americana made popular by groups like Southern Culture on the Skids.' - Bold Life Magazine 'Hipsters rejoice...Mad Tea Party, made up of Jason Krekel and Ami Worthen, offer up good ol' raw rock 'n' roll. This Ashville, North Carolina duo really hit the mark on their new album FOUND A REASON their fourth overall. Krekel has the chops on electric guitar, fiddle, bass and foot drums. Worthen's sweet voice goes with her steady acoustic guitar and ukulele. Think classic rock/blues riffs.' - On Tap Magazine 'Garage-rock radness with boy-girl vocals and thumping foot-drums.' - KUCI 88.9 FM 'Their sound, filled with retro ease, is southern rockabilly meets country blues meets Ami Worthen's electric ukulele. On the album, entitled FOUND A REASON, Mad Tea Party channels the earliest genres of American music, and adds a dose of alternative fun, spirit, and spunk to them. When guitarist Jason Krekel climbs up and down the frets of his guitar, he plucks the strings with an energy Elvis would respond to, and their songwriting channels that of Chuck Berry.' - Beyond Race Magazine 'From the opening rollicking opening chords of 'Blues Slip In', the album stomps and glides with a toe-tapping catchiness...The stomp is natural, unrestrained, and always on the verge of being sloppy. The gap between the backbeat and floor-walloping strut is primitive but perfect...It's too easy to call up comparisons to other dynamic duos currently bashing it out on the scene; rather, Mad Tea Party is more like where Flat Duo Jets meets Flatt and Scruggs.' - Unbound Culture.

Here's what you say about
Mad Tea Party - Found a Reason.