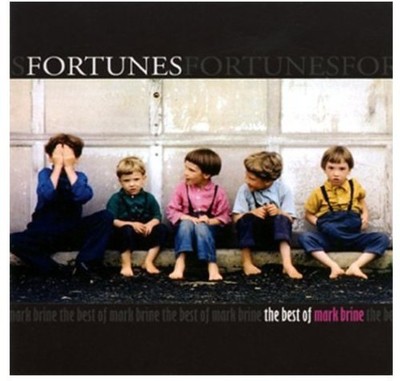 Following on the heels of 2003's highly acclaimed 'for Karrie,' Brine's new release chronicles the artist's career spanning over two decades and features highlights from earlier releases including his Grammy-nominated 'New Blue Yodel' tribute to Jimmie Rodgers that led to a debut performance on the Grand Ole Opry with Hank Snow and the Rainbow Ranch Boys, as well as several previously unreleased cuts. The title track, 'Fortunes,' is a new cut and was written by Ola Belle Reed, a traditional balladeer and claw hammer banjo player who grew up in the mountains of North Carolina and aspired to become one of the most influential forces in the traditional music scene. Given Ola Belle's roots, it seemed a fitting tribute that a portion of the sales of the CD go directly to benefit children and their families in Appalachia. There are also two new stand out tracks, '(You Are) My Sweet Dream' with shades of the melancholy 'Miss the Mississippi and You' and 'The Parlor Song' that underscores Brine's ability to write and produce songs so full of nostalgic imagery that it has become his trademark. The closing tracks are two bonus cuts from 'Songs and Music from The Carol,' the soundtrack from his novel/audio book, 'The Carol - the True Folk Legend of Jack Frost,' a time-traveling Christmas tale of stories and songs woven around the saga of Jack Frost scheduled for release later in 2004. A veteran of the Nashville music industry, Brine was signed with two record labels as both a staff writer and roster artist and has become widely known for his compelling songwriting, stylistic guitar playing and at times the social content of his songs. With his roots firmly planted in tradition, he continues to consistently combine all of his early influences from American roots music and the blues to his passion for folk and his latest offering is no exception. 'Listen closely ... and you will hear what roots songwriting is all about.' -- Roots Music Report. Brine's cast of musicians includes stellar performances by some of Nashville's finest and beyond. Fiddler, David Russell (Boxcar Willie) filled in on several of the sessions for long time friend, Linda Joseph who teamed up with Brine at Tootsie's Orchid Lounge in the 70's. Denis Colby on lead guitar (it's worth mentioning that while it's true Nashville is not want for exceptionally great guitar players, Colby should be their poster boy); Stacy Phillips (Bluegrass Union) on dobro, John Ownby on stand-up bass and drummer Rick Lonow (The Jamie Hartford Band and Burrito Deluxe) as well as a host of other characters fill out the lineup. 'Fortunes' is quintessential Americana and a rich and concise collection by this gifted singer / songwriter. The definitive collection for fans and the uninitiated listener alike, it offers a sampling of what others have come to associate with Brine's music. Geoffrey Himes summed it up best when he wrote in The Baltimore Citypaper, 'Some of his songs are sentimental, some of them are preachy, but the best of them quickly get to the heart of the matter ... and all of them are delivered in an utterly distinctive voice -- a twangy, crusty tenor full of yearning, laughter, and unexpected power.'

Here's what you say about
Mark Brine - Fortunes-The Best of Mark Brine.