Gary Bonner - For Unto Us a Child Is Born 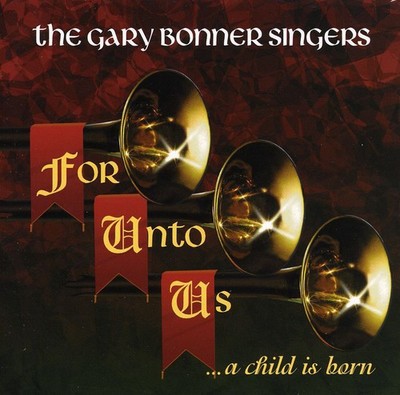 The Gary Bonner Singers, although launched in October 1995, have distinguished themselves as a choral ensemble of musical excellence and versatility; contagious, sparkling performance; and warm, vibrant choral tone. They have completed 18 recordings, including three of which were produced and distributed by Word Music, three commissioned albums, and five Christmas albums, the most recent released in March 2006. In both December 2006 and 2008, they were honored to perform at the White House Holiday Open House, chosen from over 10,000 applicants. They were also the featured choir in the 1996 Salvation Army's "Army of Stars" Christmas Eve radio program with narrator Jack Lemmon and guest artist Steven Curtis Chapman. They have performed at the Crystal Cathedral, Church on the Way, Knotts Berry Farm's New Year's Eve "Praise 2000", in numerous Community Concert Series, including Inland Empire, Fullerton, Bakersfield, and Glendale, and with the Capistrano Valley Symphony. Ranging in age from 18 to 65, the singers represent a wide diversity of backgrounds and occupations. Audiences respond enthusiastically to the 65-voice ensemble's full range of choral music and unique style which emphasizes communication and relationship with the audience. Dr. Gary Bonner, has what is described as an 'intangible magic' when it comes to creating choral music, a sound and experience that is related to the connection between the conductor, performers, and audience, creating an elusive, yet identifiable, quality which makes a performance come alive. Dr. Bonner is an internationally recognized conductor and trainer of conductors. He is currently Dean of the School of Music at California Baptist University and founder of The Bonner Institute for the Advancement of Choral Music. During his 23 years at Azusa Pacific University, he served as Dean of the School of Music and director of the University Choir and Orchestra. Under his direction the APU choir performed with the Los Angeles Philharmonic in the Disney Symphonic Spectacular at the Hollywood Bowl and performed and recorded with the Cincinnati Pops Orchestra. Two of their Christmas programs were televised by K-NBC and nominated for Emmy awards. Dr. Bonner completed more than 40 recordings with the University Choir during his 15 years as their director. One of these recordings was the Dove-Award-winning musical 'Exaltation'. In 1989 Dr. Bonner was the first American to conduct at the International Church Music Festival in Oberammergau, Germany, sharing the podium with Sir David Willcocks of Great Britain. From 1991 through 1994 he conducted the 2,000 voices and orchestra of the Disneyland Christmas Candlelight Procession. He has trained over 700 conductors in his conducting workshops and touched the lives of thousands of church and school musicians through his choral workshops. Out of his love for the grand tradition of choral music, he formed the Gary Bonner Singers in October 1995. In April 2006 Dr Bonner received MusiCalifornia's Ray Devries Church Music Ministry Award which recognized his lifetime contribution to choral music both throughout the United States and internationally. He and his wife, Dr. Patricia Bonner, have been married for 48 years and have three children and five grandchildren.

Here's what you say about
Gary Bonner - For Unto Us a Child Is Born.