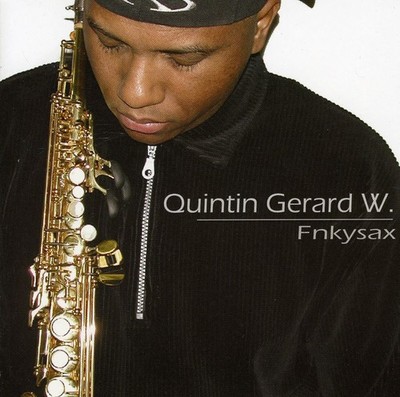 Quintin Gerard W. grew up in Norco, Louisiana and attended Destrehan High School where he was a consistent member of the District VI Honor Jazz and Concert Bands of New Orleans where he performed with, the now local legend, Harry Connick Jr. Quintin Gerard W. was also a member of the Louisiana All-State Band in 1983. Quintin Gerard W. was awarded a scholarship in music from Loyola University in New Orleans where he majored in Jazz studies and was astounded at the opportunity to study under noted Jazz master - Ellis Marsalis. Quintin Gerard W.'s entire life has been dedicated to music and playing the Saxophone. In 1989 Quintin Gerard W. moved to Los Angeles, California where he met and played with many of the top names in 'Smooth Jazz.' 'I just always wanted to be around and among the best musicians possible, so that I could feed off of the competition and really learn how to play this music.' Quintin Gerard W. has performed live with the likes of Jeff Lorber (The 'Worth Waiting For' tour), Kenny Garrett (Saxophonist with Miles Davis who is his personal friend, mentor, and 'teacher'), Najee, Dave Koz, Ron Brown, and Hollis Gentry III. Quintin Gerard W.'s other Saxophone friends include Jay Beckentstein (Spyro Gyra), Jeff Kashiwa (The Rippingtons), and Kirk Whalum. As a member of the San Diego based Fusion Jazz group 'Under The Lake,' Quintin Gerard W. had the opportunity to open for Joe Sample at the Maui Cultural and Performing Arts Center in Hawaii, and Stanley Jordan at the House of Blues in Los Angeles, California. Quintin Gerard W. has recorded with Charlie Wilson (The Gap Band's 'Testimony' CD), and the late Rick James. His major commercial recording sessions include B.E.T.'s Comic View (Opening Theme 1998-2000), MCI, Levi's Strauss, Estee Lauder, and SEARS Kenmore Television Commercials! Quintin Gerard W. recorded on the made for T.V. movie 'Here Comes The Munsters' Halloween special produced by Michael Skloff (Producer of the hit television show 'Friends' soundtrack!) Quintin Gerard W. has also been personally commended for his music and performances by Stevie Wonder, Joe Sample, Al Jarreau, and Jazz lover Clint Eastwood! With his debut release entitled 'Fnkysax,' Quintin Gerard W. is sure to take his place as one of the leaders in 'Smooth Jazz!'

Here's what you say about
Quintin Gerard W. - Fnkysax.