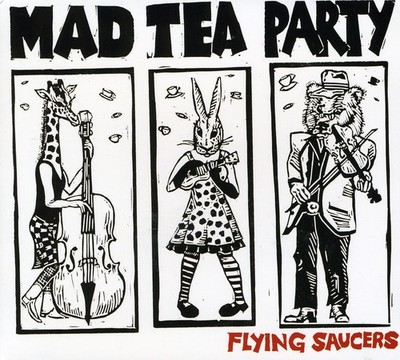 'An Asheville trio's mad swing-a-billy party' by Joe Hooten, Smoky Mountain News The Roaring '20s ushered in an era of looseness, flair, and simplistic decadence that would quickly diminish once the big crash and the Great Depression set in. For every drop of liquor that was poured out during Prohibition, bootleggers would smuggle in 10 more, giving organized crime a mission and reason to exist. The extravagant decade can conjure up feelings of a time long forgotten in both fashionable trends and politics, but not necessarily in music. The toe-tapping, ragtime/retro-swing sounds of Asheville's Mad Tea Party have appropriately bottled the 1920s with some Blue Ridge flavor in a wonderful new CD entitled 'Flying Saucers'. Mad Tea Party is a collection of three musicians whose fervor for Carter Family harmonies and 1920's ragtime are equally matched by their devotion to both jazz and folk music - Ami Worthen (vocals, ukulele), Jason Krekel (vocals, guitar, fiddle, tenor guitar, and kazoo), and Lora Pendleton (vocals, bass). The lo-fi recording of Flying Saucers complements the music by accentuating the nostalgic feelings of time long ago when folks use to sit round the gramophone as every scratch on a record became another instrument within each song. The slight recording imperfections on Flying Saucer are not significant; they too become a part of the music. The album is a mix of bouncy swing numbers, quirky folkster grooves, and slow swaying ditties. Early on the album "Pagan Love Song" finds it's place somewhere around sundown with a fiddle solo weaving in and out of the shadows among the old and new growth that fills these beautiful mountains. Ami Worthen's voice sails into Iris Dement and Stacy Earle waters on the lonesome "I'm an Old Cowhand," which I imagine I'd sing if I were perched up on a split-rail fence overlooking an open field. The title track feels like the Carter Family classic, "Atomic Power." The combination of UFOs and the 1920s appear to be strange bedfellows, yet the end result couldn't be more fitting. Someone should tell the Coen Brothers to use "Walking in the King's Highway," perfect for the opening scene of their next movie. Like the Squirrel Nut Zippers, revival music has become the mission for Mad Tea Party. With no need for drums, 'Flying Saucers' jams with old school style and swing while blending in modern energy, impressive musicianship, and lyrical elements that could be heard in either 1925 or 2005. Although Dust Bowl-era music is not likely to find it's way into the Billboard charts any faster than people were going to stop drinking during Prohibition, those that appreciate exceptional retro-music and a wonderfully entertaining live experience should definitely check out Mad Tea Party and buy Flying Saucers at your local record store.

Here's what you say about
Mad Tea Party - Flying Saucers.