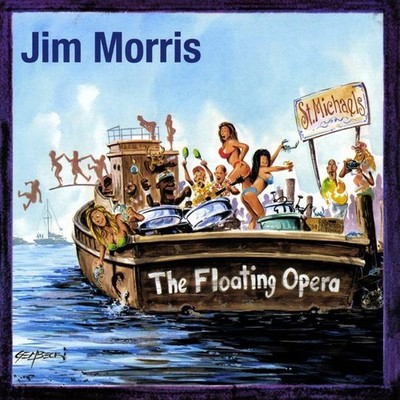 JIM MORRIS Jim Morris is an articulate singer/songwriter with a devotion to storytelling. Whether it is a thoughtful ballad about doomed love or an anthem to a night of drunken revelry, the listener can always count on well-crafted songs with carefully drawn characters, clever lyrics, and satirical charm. Although Jim's musical style is reminiscent of Jimmy Buffett and Jerry Jeff Walker, he has a knack for defying categorization. He mixes a whimsical island sound with a splash of Texas to produce a sound that is uniquely Gulf and Western. Jim grew up in Georgia and Florida and has a heritage rich in music. His grandfather led a dance band, and everyone in the family either played an instrument or sang. At age 10 Jim taught himself to play the guitar by listening to Hank Williams records. After college while pursuing a career in human resources management, he continued to write songs and dream of the day when he could do it full-time. "After I graduated, I wanted to be a drifter and a writer; instead, I settled for corporate executive and closet entertainer." During his 15-year corporate career, his job allowed him to live in several interesting locales, such as Montana, New Orleans, St. Simons Island, and the Chesapeake Bay area, all of which would figure prominently in his writing. Following a business trip during which he renewed his love affair with the southwest coast of Florida, Jim took the leap he had been contemplating for some time and left the corporate world for good. Jim's initial plan was to write songs and play gigs around Florida. From the beginning he took a big risk by featuring original music. "I spent about a year writing and developing a catalog of songs. I was unsure of my ability to sing and play the guitar professionally, but I thought my songs might separate me from the other performers." A fortuitous meeting with recording artist Randy Matthews would result in Matthews producing Jim's first recording, "Laid Back and Key Wasted," released in 1996 by Fish Head Music. As you would expect, each song tells a story: the title track is about a guy who gives up the corporate world for the beach; one is about the exploits of a pilot who flies contraband; another is about roadkill and the people who collect it; others tell great stories of sailing, fishing, and drinking. "After my first CD was released, I changed my focus. I stopped playing bars so much and I worked coffeehouses and bookstores. I wanted to play before a listening audience who might appreciate what I had to say. I made less money, but I started to develop a fan base." Now those fans travel from all over the country to catch one of Jim's sold out shows. Hoping to capitalize on his ability to be a prolific songwriter, Jim decided to release a new CD every year. He saw this as another way to separate himself from other artists. In the eight years since "Laid Back and Key Wasted" debuted, Jim has released eight additional studio CDs, three live CDs and two compilations. He found that he was capable of creating memorable stories in a variety of musical moods and settled on a formula that he was comfortable with and that people seem to enjoy: some tropical, some jazz, some country, some acoustic folk, and some humor. It certainly reflected his musical tastes. Although his CDs showcase a variety of musical styles, they have amazing continuity. With the success of each CD, the pressure grew to perform more outside the state of Florida. Although Jim wanted to be a "lifestyle artist," fishing by day and playing music by night, he also wanted to broaden his fan base which required him to travel more. He formed the Big Bamboo Band in order to capture the full sound of his CDs in live performances. Currently, Jim plays approximately 125 shows a year, with an almost 50/50 split between solo shows and band shows. Last year he played in 26 different states as well as Belize and the Bahamas. He explains, "I have a collection of songs that is more conducive to a listening audience, and a collection that is more conducive to a hell-raising party crowd. I am able to cover both situations without much duplication. Playing with the Big Bamboo Band requires more discipline and concentration than playing solo. It took a while to get used to it. Playing with a band is like playing team sports, and you get the same feelings after a tight performance that you do when you win the big game." In addition to being a singer-songwriter and recording artist, Jim also runs his own record label, Fish Head Music, a small but very successful operation. "Running the business is very satisfying. I get involved in every detail from producing the music to designing the T-shirts. I didn't spend more than a few minutes deciding whether or not I wanted to be an independent artist. Had I started when I was younger, I might have felt differently about it. At this stage, I have the luxury of playing as little or as much as I want. For me it was never about whether or not I could be famous, but whether or not I could be successful doing things my own way." Jim will continue to direct his efforts toward expanding his fan base and touring with the Big Bamboo Band. He will still make time for fishing and boating and will always be on the lookout for song material. "I don't have much to show for my years except some great experiences, and that's what I write about - the characters I've met and the places I've been. The thing that is both satisfying and alarming is that most of it is true."

Here's what you say about
Jim Morris - Floating Opera.