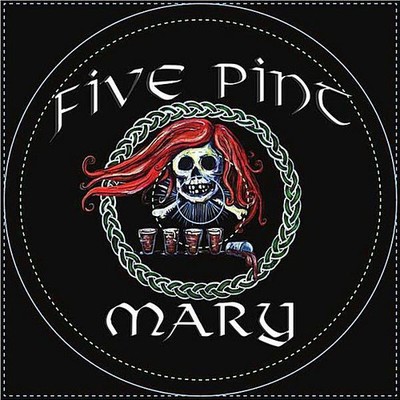 Five Pint Mary Irish/Celtic Rock Bend, OR Bio: 'Upbeat, loud, & rollicking, Five Pint Mary plays a unique blend of Celtic rock with an edge of punk. Influenced by Celtic music played in Ireland, Scotland, Newfoundland, & America, as well as the bluegrass and Americana genres. An eight member band, Five Pint Mary collectively play guitar, mandolin, violin, accordion, banjo, tin whistle, bass, drums, and 3 part vocal harmonies.' Reviews: Sixty Seven Music / Celtic Music Promotions, Portland, OR: 'Here's a great Irish/Celtic rock band out of Bend, Oregon, USA. We first learned about them last summer when we were scouting out Highland Games and saw they were playing at a couple of Games in eastern Oregon. Fast forward to a month or so ago when we were finally able to catch up with them and invite the band to cross the Cascade mountains and perform here in our area at the Dublin Pub as part of our "Sunday Night Celtic Music Series". That show was a huge success and it was great to finally meet all the members in person.' When we say 'all members', there are a lot of them! Totalling 8 (and sometimes 9), Five Pint Mary is: Alyson Farquhar/vocals, Michael Holmes/accordion, guitar, vocals, Sarah Pollock-Holmes/vocals, guitar, tin-whistle, Casey Holloway/ mandolin, Elizabeth Harman/ fiddle, Rick Havern/banjo, Matt Gwinup/ Guitar, David Fuller/bass and last but not least, Kevin Newton on drums! All those musicians and instruments add up to a full and raucous Irish sound that includes traditional songs as well as some original material that pleases audiences and insures everyone has a great time. The band has only been together two years at this point but has their own loyal following in their hometown- and with their first gig here in Portland and some recent national exposure on the PaddyRock Podcast out of Chicago, Five Pint Mary is on their way to some bigger and better things!' The Bend Bulletin / Bend, OR The Source Weekly / Bend, OR 'We gave a listen to Five Pint Mary's new self-titled album last week and we'll be dipped in dirt if those Celtic rockers didn't make us want to drink our damn faces off. The party-hardy band blends traditional Irish sounds with contemporary punk sounds for a very Flogging Molly-esque product that should go well with a pint (or five).' Featured on the 01.07.12 podcast from the Chicago-based Paddy Rock Radio / Paddyrock.com (the #1 source for all things Celtic Rock & Punk on the web with a streaming radio show, podcasts, CD reviews, etc.)