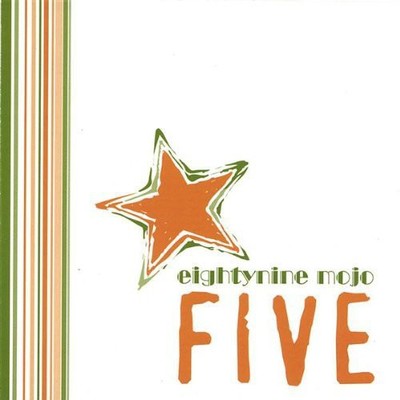 89 Mojo has been an area favorite, packing venues for years, mainly due to these three factors: their sheer love of music, their bond with each other and with their fans, and their absolute joy of performing and entertaining. The brand new disc 'Five' builds upon the hooks, harmonies and guitar that they're known for. The entire process - from the writing to the recording to the mixing - was done with one sole purpose: to make the best record possible. They chose only 5 songs to concentrate on, recorded in a top notch studio (and onto the slowly disappearing 2' tape) and took it up to Minneapolis' Echo Bay (previously the famed Oarfin Studios, who've hosted countless projects for major label artists) for mixing. The result is a 17 minute blast of radio-ready, melody-driven rock. Think 'Cheap Trick hooks up with Jimmy Eat World & Lit. ' Fresh and modern, while refreshingly old-school. While some songs are blasts of energetic rock bliss, others blend introspective lyrics with memorable melodies. It's an intoxicating mix of passion and fun, brought together by the timeless qualities of strong songwriting, arrangements and musicianship. Besides the countless clubs they've played, the band has also performed at major festivals (including Milwaukee's Summerfest) as well as music showcases such as the Indianapolis Music Conference. 89 Mojo music has been featured on many area radio stations, publications, TV broadcasts, and internet sites (including RollingStone.com, where they were chosen as the 'editor's pick of the day'). The band has also had the pleasure of opening for many national acts, including: Sister Hazel, Will Hoge, Warrant, Firehouse, Hootie & The Blowfish, Night Ranger, Edgar Winter, Great White, Rick Derringer, and more. Despite all the recording experience, 89 Mojo is still best when witnessed live. Although they could fill three sets worth of all original material, they choose to mix great classic and current cover tunes right along with their own. Whether it's something by Nickleback or The Beatles or Sublime or a party-themed 80's medley; their own material can slide right in-between without losing a beat. Whether it's a 'power-hour' set or one of the band's infamous nights of nonstop rocking for 3 hours, it's an energetic, sweaty, sing-along Saturday night roller coaster ride. The ride may leave you hoarse and a little buzzed, but you can't wait to go again. With thousands of discs sold, hundreds of gigs under their belts and a loyal fan base, 89 Mojo is paving their own way in their love of music... and having a damn good time doing it.