Bobbi Nikles - Fire in the Air 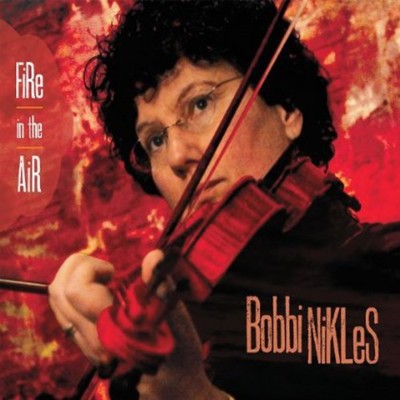 Fire in the Air is the long-awaited debut album of Bobbi Nikles. The core sound is fiddle and guitar, with various tracks enriched with the harmonic and contrapuntal sounds of mandolin, celtic harp, bass, viola, vielle, and viola da gamba. Irish jigs, reels and airs are woven into an emotional journey with two of Bobbi's luscious originals, a recently composed Swedish tune, and a ripsnorting toe tapping polka set. You will find the magical sound of twin fiddles and enjoy the inventive pairing of an Irish reel, American Old-time tune, and Pennies from Heaven. For years Bobbi Nikles, Paul Kotapish, Kyle Alden, and Maureen Brennan held court as Curlew at Schmidt's Pub on Solano Avenue in Berkeley. Here they reprise some of their favorite Curlew sets. Schmidt's is an intimate cigar and beer pub where smokers hang out on the porch and students, writers, and chess players enjoy the comfortable salon. One day a month friends of Curlew enjoyed a Guinness, some red wine, or tea, and socialized in a house concert atmosphere listening to sets like Riding on a Load of Hay/The Murroe/Balleydesmond/Finnish/Jessica's, which frequently closed the night. Three Curlew sets are included on the album. Dorothea is an achingly beautiful crooked tune I fell in love with the moment I heard Sarah McFadyen play it at the Fiddle Tunes Festival in Port Townsend, Washington. The tune is composed by Ola Backstrom from Sweden and Julian arranged it for string quartet. I hope you like it. Tune for Mairead & Anna Ni Mhaonaigh is composed by Daithi Sproule who recorded it with Liz Carroll who has been a source of inspiration for me and has given me the final push to create this album. Thank you Liz! I lead off with my favorite set on the album Rakes of Clonmel/Cliffs of Moher. I visited the cliffs of Moher with my family on a pilgrimage to County Clare and the cliffs have graced my computer desktop ever since. I have played these jigs for Contradances for many years since I learned them from Patrick Ourceau at Friday Harbor Irish Camp. I love his interpretation of Paddy Canny's playing and I hope you will find some of it has rubbed off on me. The album contains a total of ten tracks. Enjoy!

Here's what you say about
Bobbi Nikles - Fire in the Air.