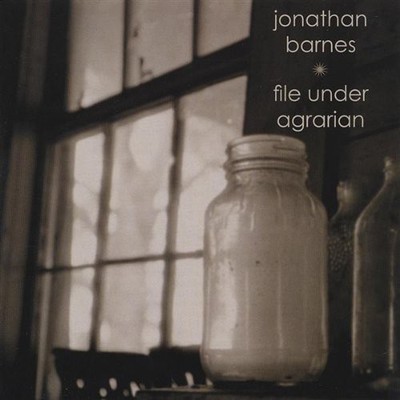 Thanks for visiting my cdbaby page! This album's songs represent my musical influences all bundled together. It's something i wanted to do for a long time and finally was able to do it. enjoy. Singer-songwriter-guitarist jonathan barnes was born to create. Jonathan grew up in a musical home in juliette, Georgia, playing acoustic & bluegrass music. He learned in those early years the power of both a single note and a flurry of flatpicking. Jonathan continued his exploration of different musical genres while in college at vanderbilt university in Nashville, developing his personal and emotive style and songwriting while jamming with quality musicians from across the country. A lover of jazz, bluegrass, funk, alt-country, rock & roll, and folk, he continues to absorb these styles in his quest to create his own musical tapestry. Jonathan not only has a passion for playing music, he also loves writing songs. Upon moving to knoxville, tn in 2001, he had the opportunity to record a collection of songs that he had been writing over several years. The album can be filed under agrarian. Enjoy. .: album notes from jonathan, april 2003:. it's finally here! ^#^making this record has been a goal of mine for several years--it started taking shape when mark buckner, a friend from church, introduced me to my eventual co-producer on file under agrarian, russ miller. Russ and i met on a sunday evening at covenant recording studios, and after i had played him some of my demos and explained the arrangements that were in my head, he said that he wanted to record the project . . . and start right then and there--we began with 'right here with me' and 'crossroads.' each song after that was progressively more intense and more of a learning experience. We laid down all the drums on the record in the basement of my house on twining drive--sort of a large open area with wood paneling, a fireplace and carpet--russ brought over his portable digital recorder and while i played a scratch track (guitar & vox), jamie cook and scott johnson, at different times throughout the year, laid down the drum tracks. Russ then transferred the tracks over to his protools rig, and the real fun began. We spent most thursday evenings together in the studio putting down guitars, vocals, keyboards, distorted vocals, bass, and anything else i could think of, as well as tweaking every sound we heard from the monitors. Lots of musicians helped me on the record--sean farrell played violin on 'jean'--christina my wife sang on 'ar-4300 (access reader)'--my brother stephen played the electric guitar on 'i remember'--we recorded the guitars on a yamaha four-track--i went down to juliette, Georgia and recorded 'mattie kate' with my dad on mandolin in his studio--scott johnson came over from the UK to record 'Atlanta's burning again' and 'unfulfilled' (what passionate playing)--jamie cook, a local knoxville musician, did such an excellent job putting the groove down on those drum tracks--russ miller lent a hand on 'only a fool' with his soulful pedal steel--without these musicians it would have been tough to put together an album like this. I think the end result didn't lose any of what was put in. everything is clear and i feel keeps to the standard of what i pictured in my mind. I hope you enjoy file under agrarian. .: some reviews:. 'Jonathan Barnes reminds us of the reason we love independent artists. Void of flashy production, Barnes' curiously-titled project File Under Agrarian recalls a mixture of vocal sounds including Vigilantes' Bill Mallonee, David Wilcox, and The Normals' Andrew Osenga. Lyrics are at times melancholy, even angst-filled, but always replete with intriguing imagery, everything from giant Coca-Cola signs to crabapple trees and sunlit hair. A tasteful bit of storytelling originality.' --Grassroots Music, November 2003 'blues + bluegrass + southern rock, with a dose of contemporary sophisticated chord voicings. The les paul grabs you by the collar and wakes you up. this would be the perfect CD for driving all the way across Nebraska in a convertible. . . The sound is great, the songs are great, you've got a winner here Jonathan. Great work!!!!!' --Aaron Dettling, Birmingham, AL 'jonathan barnes' new album file under agrarian is wise beyond it's years. From folk to rock to bluegrass, barnes switches gears constantly and masterfully. Without major label backing, one would expect the production to be simplistic, but file under agrarian offers thoughtful arrangements and pinpoint production that fuse the many influences that paint barnes' songs. Such tracks as only a fool and gunpoint are alt-country gold, showing barnes' knack for melody and guitar greatness. Both his lyrics and vocals seem personal, evoking ben folds ballads and pete yorn pop. After a debut like file under agrarian, one would expect to hear much more from jonathan barnes. And his wife can sing too!!' --Cole Ballweg, Fort Worth, TX 'File Under Awesome. Good work jeb!!! I love the packaging...fits and enhances the music perfectly. The word I keep coming back to on both the packaging and the music is 'vintage.' Rooted in the old school but a modern & personal take. Allmans + Son Volt + Robert Johnson + Gillian Welch = this music. Vintage. Power. Agrarian. Good work. Buy two.' --Kevin Jackson, Louisville, KY.

Here's what you say about
Jonathan Barnes - File Under Agrarian.