Brad Hoyt - Far Away from Everyday 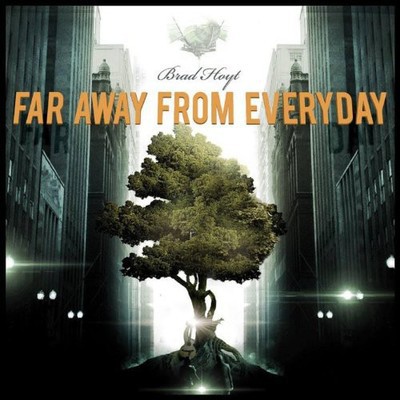 When Brad Hoyt made the journey from jazz piano to fingerstyle guitar, he didn't require a passport. It is possible to easily navigate between these stylistic countries, with all the natural links that exist between them. Hoyt's ambitious new album, Far Away from Everyday bridges this gap with 14 original compositions recorded by unique ensembles combining the talents of modern fingerstyle guitar masters with some of jazz's most distinctive artists. 'Musicians such as 3-time Grammy-winner Jeff Coffin (saxophone), 2-time Grammy-winner Howard Levy (harmonica) and recent ASCAP Golden Note Award honoree Phil Keaggy (guitar) make up only ten percent of this featured line-up, joining Hoyt who plays various incarnations of the piano or his beloved one-of-a-kind 30-string harp guitar.' - Janet Goodman, Music News Nashville Brad Hoyt was born May 27, 1971 in Muncie, Indiana, and lived there until graduating college. As an undergraduate, Hoyt took lessons in both classical guitar and jazz piano at Ball State University. Hoyt cites his teacher at that time, jazz pianist Frank Puzzullo, as a major early influence. He performed there in big bands and small groups and with his own blues band and played solo piano. When he began experimenting with plucked piano strings, he was so taken with the sound that he started envisioning a fingerstyle string instrument on which he could imitate that sound. A 12-string guitar or mandolin came close, but he preferred an instrument meant to be played with the fingers instead of a pick. After college, he moved to New York, where he toted an electric keyboard around Manhattan playing various jobs. A restaurant gig for which the owner leased a grand piano provided steady work (and relieved him of all the lugging). After hooking up with a music publisher, Hoyt had some of his music placed in TV and film, including NBC's Today Show. With the Off Broadway group the Samaha Singers, he performed an original piece he arranged for chorus and orchestra. He also performed at such venues as the legendary CBGB's with the rock fusion group NightPeople. Three years after moving to New York, he got married and relocated to Colorado, where he continued to write and record his compositions. In 1999, he and his wife Andrea moved to her hometown of Prague, where they had their first child. While in Europe, he recorded and performed with the group Art House, which he founded with bassist Alexander Jurman. In 2002, massive flooding in the Czech capital led to Hoyt moving back to Indiana with his family. He took with him a renewed fascination in stringed instruments, and finding the "portable plucked piano" he had in his head. Having become taken with the harp guitar, a guitar-like instrument with a second tier of open, non-fretted strings, he attended the 2004 International Harp Guitar Gathering in Williamsburg, Va., hoping to find a luthier who could make the model he envisioned. That man proved to be British harp guitar specialist Stephen Sedgwick, who, through a gradual and painstaking process, worked with Hoyt in introducing bold new features to the 10-string Brazilian folk guitar that served as their starting point. Dubbed by Sedgwick the arpa viola caipira-Portuguese for harp country guitar-Hoyt's dream instrument featured 15 bass, fretted, and super-treble double-courses totaling 30 strings. With his instrument completed and his first CD released, Brad forged ahead, working on new music for his next CD. When Brad completed this monumental album, 30 renowned musicians participated from around the world. He had this to say in the liner notes: The process of creating and recording the music on this album was influenced by a number of factors. Firstly, I wanted to expand on the duets format of my first release and explore the harp guitar's role in various ensemble settings. As I was deciding on the instrumentation for these tunes, I made a concerted effort to ask musicians whom I've greatly admired and have been inspired by over the years. Some were harp guitarists and other musicians whom I've had the privilege to perform with while others were widely acknowledged masters of their instruments that I've been profoundly impacted by. The result is a very cool and unique amalgamation that highlights the types of music I have a deep affection for. After three years of work on this music, I find it consistently humbling, emotional and gratifying to hear the musical language and personalities of my favorite musicians and friends all together on music that I've written. It is my hope that this music and the creativity of the performers can speak to you in a meaningful way like it does to me.

Here's what you say about
Brad Hoyt - Far Away from Everyday.