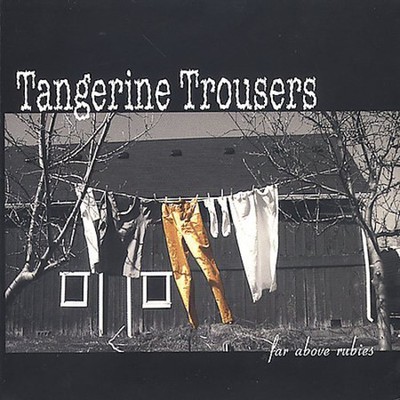 Tangerine Trousers -- 2003 Detroit Music Award Winners for 'Outstanding Folk Artist/Group'!!! From the honest and introspective story telling of folk to the savvy hooks and craftsmanship of pop music; the vocal harmonies from country and gospel music to the soul and rhythm of music from far away lands like Ireland and Africa; add the sophisticated harmony and walking bass lines of jazz... and you get the 'eclectic and sublime' acoustic sound that Tangerine Trousers has dubbed 'Folkrockoustic'. All this wrapped into a high energy live show that'll knock your 'trousers' off! Each of the 6 members who make up the fabric of the Tangerine Trousers are as unique as the music they create, covering instruments from acoustic guitar, upright bass, accordion, flute, mandolin, lap steel, dobro, harmonica, saxophone, musical saw, bells, whistles, drums & percussion, and multi-layered vocal harmonies to soothe even the most savage beast. Entertainment is an equally important focus for the band, and the audiences are always left smiling! The band's latest release, 'Dressed for Success', attracted guest contributions from some of the hottest names in roots-flavored alternative music, including Caitlin Cary, Thad Cockrell, and John Keane -- and production help from Chris Stamey (Whiskeytown, Ryan Adams, Michael Stipe, Catilin Cary, Tift Merritt). The band's 2001 release, 'Far Above Rubies,' earned a nomination for the 2002 DETROIT MUSIC AWARD for Oustanding Acoustic/Folk recording, was named one of the 'Top 40 CD's of 2002' by the Thursday Breakfast Jam show on KRCL-fm in Salt Lake City, UT, and was named one of the TEN BEST FOLK ALBUMS of 2002 by The CURRENT Magazine in Ann Arbor, MI. Tangerine Trousers are very proud to have showcased at the CD Baby/Oasis CD Manufacturing Showcase at FOLK ALLIANCE 2003 Coference in Nashville, and have spent the past two summers headlining major music festivals across the Midwest, including Blissfest, Hiawatha Music Festival, Riverfolk, the Arts Beats and Eats Festival, the Muskegon Summer Celebration, and the White River Folk Festival. __ From ECURRENT Magazine - December 2002 Folk Perspective -- Best Folk Albums of 2002 by Twila Oxley Price Tangerine Trousers -- Far Above Rubies (self-released, 2001) Fun local band Tangerine Trousers gives a fantastic live show and puts some of that magic into this album. Far Above Rubies showcases their eclectic instrumentation, their stunning vocal virtuosity and their unusual songwriting.

Here's what you say about
Tangerine Trousers - Far Above Rubies.