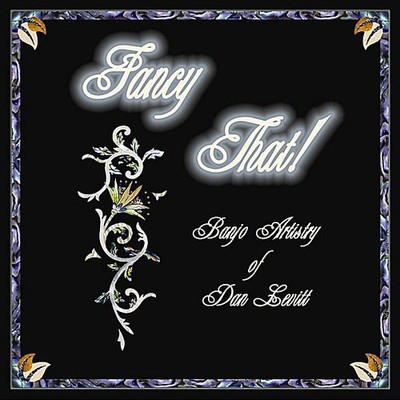 Dan Levitt can make a banjo sound like nothing you've ever heard before. And his handmade "golden banjo" is like nothing you've ever seen, either. A master craftsman as well as a classically trained musician, Dan Levitt worked on this 5-string banjo - on and off - for 25 years. Completed in 2003, it contains approximately 300 pieces of inlay, 800 pieces of marquetry, and numerous intricate carvings. It is, in itself, an incredible work of art. But it's perfection and intricacy is, truly, the least of it's wonders. In the hands of it's creator, this spectacular instrument has an uncanny number of voices. Taking the two-finger picking style (called frailing) to a whole new level, Levitt makes his banjo conjure up sounds of a harp, a sitar, a harpsichord, or a lute...as well as, of course, a traditional banjo. And his repertoire in Fancy That! Displays a correspondingly wide range of genres - from delicate original compositions recalling classical pieces or medieval melodies to blues, bluegrass, and folk; from country, Irish, and old-time to ragtime and swing. Levitt is joined by a half dozen other gifted musicians on this album, including Dennis O'Hanlon on guitar, bass and harmony vocals (with Bonnie O'Hanlon); Ross Levinson on fiddle; Roger Goodman on Harmonica; Tom Corbett on mandolin; and Barry Kohan on drums. The tasteful interplay of their instruments - as well as Levitt's occasional bowed bass or cello - weaves a rich, complex tapestry of harmony, counterpoint and texture. In all, Fancy That! Features 16 deliciously bite-sized tracks, half of which are Levitt's originals. All but two are instrumentals . . . The vocals add a nice variety. Together, they provide a Whitman's Sampler of musical styles. From exuberant traditionals like Whiskey Before Breakfast to haunting originals like Misty Morning, which sounds like something from the Middle Ages; from the bluesy, bouncy tune, Going for a Ride to the old Irish gem, Sheebeg Sheemore; from the just-for-fun Skeletons in the Closet to the ever-popular banjo classic, Eight More Miles to Louisville - every song is played with an exquisite precision that gives this album a unique, classical feel. It is, as Levitt says in the album copy, "the softer side of the banjo." In short, the ear never gets tired (as mine sometimes does when I listen to more than half an hour of intense banjo-driven bluegrass music)....because it is listening, in essence, to so many different instrumental "voices." I don't really know if this review can do this album justice, but the banjo artistry of Dan Levitt is, in turn, beautiful, fun, toe-tapping, elegant, engaging, and always...just plain amazing! (Jackie Morris - BardChord, Songmakers' Newsletter and FolkWorks) 'I've been struck by the distinct beauty he brings out in the instrument. Dan's own evocative compositions have a timeless eloquence.' - Richard Berman, nationally acclaimed singer & songwriter 'Very uniquely styled and full of interesting little musical details.' - Chuck Erikson, "Duke of Pearl" and banjo maker 'It is such a pleasure to listen to, fun and full of life. Your music writing is lovely. I just love it! '- Jacki Breger, nationally recognized musician of children's folk music 'We are fascinated with your ability to extract so many unexpected sounds from the banjo.' - Lynnda H. 'Every time I hear 'Misty Morning' it makes me cry.' - Heidi 'If 'Sheebeg Sheemore' were on vinyl, I would have worn it out by now. That melancholy sound just grabs me and I can't get enough of it.' - Craig L.

Here's what you say about
Dan Levitt - Fancy That! Banjo Artistry of Dan Levitt.