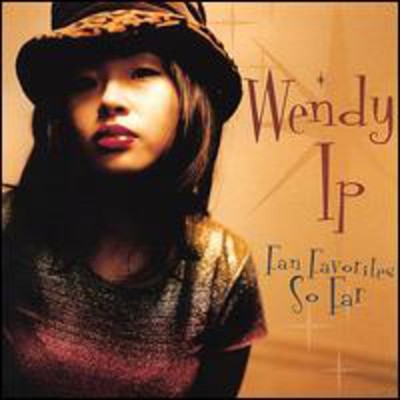 Wendy's debut album, Fan Favorites So Far, won her all the right kinds of attention from both fans and critics who immediately took to her heartfelt songwriting and sincere, unique vocal delivery. Wendy's past has provided her with the kind of experience, emotion and unique perspective from which she creates her music. Her latest release, A Different Kind of Life, showcases further development in her songwriting and proves that Wendy continues to deeply affect her audience. While her lyrics move her listener, Wendy's melodies are unforgettable. Wendy has a penchant for writing memorable hooks and her songs linger in one's head even after only one listen. A blend of her instantly recognizable voice, striking melodies and clever poetry makes Wendy an extraordinary act. She has been compared to Ben Folds, Aimee Mann, Elton John and Elvis Costello...the list goes on - but her original style is undeniably her own. The sound of Wendy Ip (a.k.a. Just Wendy) is a result of a turbulent, rebellious childhood in an eccentric household and the interesting relationships and experiences she has had since. Her music makes you realize that you are not as strange as you think - that someone else understands...very well. You hear a new perspective while relating at the same time - and you want to hear more. Wendy's parents had a plan...and she ruined it. Wendy was born in Winnipeg, Manitoba. As an academic achiever beyond her age, Wendy was fast tracked through school by her parents who insisted she pursue a medical career. However, along the way, the piano lessons in which they enrolled her at age four ignited in Wendy a love and obsession with music. At nine, after hearing her father's Beatle records, Wendy instantly knew what she wanted to do for the rest of her life and she started singing and writing her own songs. Wendy's adolescent years were ridden with constant conflict with her parents. They had hoped that the piano lessons would result in, at most, an impressive hobby, and were actually disappointed that it became much more. While in school, Wendy was singer and keyboard player in a rock cover band. Wendy also continued composing and secretly made demos at home while her parents were away at work. Finally, after repeated attempts to run away, Wendy left Canada for good in desperate pursuit of her freedom and happiness. Wendy settled in New York City, where she felt like she could do and be anything she wanted. Not at all intimidated by the bustling urban center, Wendy, in fact, embraced it. It was there in New York that she really began to find her creative outlet, performing her original music in public for the first time. On stage, Wendy's passionate, sincere performances are doused with a sense of humor that could only have come from an unconventional past. She'll move you to tears only to have you laughing a moment later, and then another moment later, singing along. In addition to performing regularly in New York City with her band, Wendy has also toured in the United States and England. Wendy is currently on Carnegie Hall's roster of sponsored artists for the Neighborhood Concert Series. Her albums are currently available at all Virgin Megastores in New York City (where they have both been listening station features), Rough Trade Records and Black Dog Music in London, and most online outlets. A regular cast member of the ongoing off-Broadway hit "Losers Lounge", Wendy has also performed with Anthony of Mercury Music Prize winners Anthony & the Johnsons. She was also recently featured in the VH1 program "My Coolest Years: The Bad Girls" and was singled out by the New York Post as being "totally engaging". **************** What people have said about Wendy Ip: 'While most of the guest baddies are fun, Da Brat and Wendy Ip are not only totally believable, but totally engaging,' - Linda Stasi, New York Post 'And when Wendy Ip was so foolhardy as to essay the dance part of 'Kiss', she had the moves to take it over.' - Robert Christgau, Village Voice 'Take Wendy Ip. On her album 'Fan Favorites So Far', she comes off as a savvy songstress who's been locked in a small room with old Beatles records.' - Kevin Bronson, LA Times 'Wendy Ip could very well be the next in a line of femme pop music writers that traces back to the master herself, Carole King. Blessed with a gift for melodic hooks that jump right out and grab you by the ears...' - Paul Andersen, Entertainment Today 'If you're looking for a fresh voice, stop here. Wendy is it.' - Songwriter's Monthly 'Imagine the talents of Elton John & Bernie Taupin tossed together in one individual. Now sprinkle a dash of Elvis Costello & Ben Folds into the mix. Oh yeah, and for good measure, make that lucky individual a very attractive woman and you'd be looking directly at clever & quirky songstress Wendy Ip.' - Chris Morrison, Amazon.com.

Here's what you say about
Wendy Ip - Fan Favorites So Far.