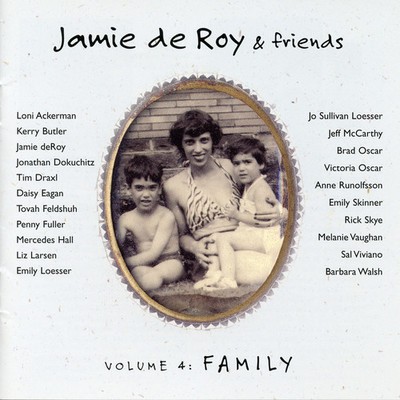 Jamie deRoy has been declared 'The Fairy Godmother of Cabaret' because she has helped so many performers in the cabaret world. But life is much more than a cabaret for the versatile performer, who is equally celebrated as an actress, record producer, and talk show host. A gifted singer/comedienne, Jamie has appeared as Joan Rivers' opening act in New York and Los Angeles, and headlined at every major club in New York. Jamie has also enjoyed successful engagements at Caesar's, Showboat and Trump Plaza in Atlantic City, and The Sahara in Lake Tahoe. For the past 12 years, Jamie has hosted and produced the critically acclaimed variety show, Jamie deRoy & friends, which also serves as a basis for her 10-year-old cable television show, Jamie deRoy & friends. It airs in the New York tri-state area, Washington, D.C., and Los Angeles. Her television show has earned nine Telly Awards and First Place in the Northeast Video Festival. Jamie has recently produced three CDs, available on Harbinger Records. Jamie deRoy & friends: The Child in Me, Volume 1, won the MAC Award for Recording of the Year, and Volume 2 of this popular recording -- featuring Tony winners Faith Prince and Roger Bart -- was released in November 2000. Jamie deRoy & friends, Volume 3: 'Tis the Season, a collection of holiday songs, was selected as one of Time Out New York's hot Holiday Gift Ideas, and won the 2002 MAC Award for Various Artist Recording of the Year. Jamie is also the Executive Producer on several Harbinger releases Heather Mac Rae: Songs For My Father (2002 MAC Award for Solo Artist) and the recently released Mabel Mercer: Previously Unreleased Live Performances and the upcoming Songwriters Showcase: Broadway Tunesmiths. Jamie's expertise extends into theatre, television and film. She was a co-producer of The Complete Works of William Shakespeare (Abridged) at The Century Center, and also co-produced it's original Off-Broadway version. With Rick McKay, she produced the Emmy-nominated segment 'The Biggest Little Operas in Town' for City Arts, as well as that show's 'Where Do Musicals Come From?' and 'All That Glitters." Jamie is also one of the producers of McKay's highly anticipated upcoming documentary, Broadway: The Golden Age. Jamie is currently an Associate Producer of the Broadway show "Say Goodnight Gracie", written by Rupert Holmes and starring Frank Gorshin. As an actress, Jamie has guest starred on numerous TV series including Alice, Spiderman and Knight Rider. Her film credits include GoodFellas, Raging Bull and Married to It. Onstage, Jamie appeared with Rene Auberjonois in Three Penny Opera. She was also seen in The Drunkard, a play with musical direction by Barry Manilow, who became her musical director for several years. Jamie has earned a total of seven MAC Awards, four Back Stage Bistro Awards and CaB Magazine's Lifetime Achievement Award. She is President Emeritus of MAC, and was one of the first women to join the famed New York Friars Club. She also sits on the Boards of The Friars Foundation and CAP21, and is on the Honorary Board of the Humane Society of New York. Jamie is also actively involved with New York Women in Film & Television.

Here's what you say about
Jamie Deroy & Friends - Family, Vol. 4.