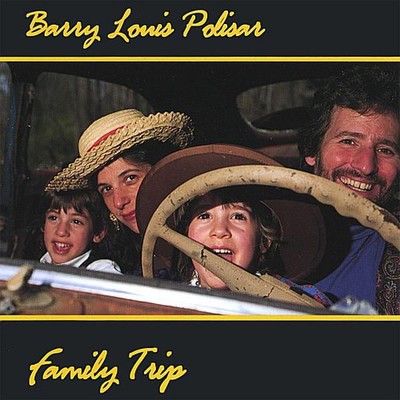 A Children's Music Award Winner! This is a unique collection of Barry's best songs about families--and what a trip they are! The songs range from the giggle-producing 'Early Sunday Morning'--a song about two siblings who wake each other up and end up in a hilarious and ridiculous food fight--to the sensitive 'I Miss Grandma.' Also included are 'We Don't Have to Share' and 'When the House is Dark and Quiet,' Barry's song that is often taught at summer camps as 'The Babysitter Song.' Barry explores a host of musical styles on this recording that include Memphis slide, blues and folk influences. An array of musicians on fiddle, bass, clarinet and percussion give this recording a polished sound. 'Barry Louis Polisar is an American treasure. He has altered forever the way children and adults communicate through music. He's irresistible to kids who have long needed a determined and articulate spokesperson to remind the world of childhood's realities.' --All Ears: A Guide to Recorded Music for Children 'I listened to your tape last night and I played it for my son and his two friends this morning. They sang it all the way to school and I used it for two creative writing groups in his class.... kids were sneaking back at lunchtime to hear it.' --Laurie Gibb, Children's Book Store Denver, Colorado 'Polisar writes and performs children's songs with a humorous yet lifelike twist.' --Sunday Oklahoman, Oklahoma City, Oklahoma 'His songs are humorous anthems that will have non-conformist children clamoring for more.' --Chicago Tribune, Chicago, Illinois K-Gr 6--Polisar's brand of humor is unique in childrens' recordings. This is a good addition for collections wanting to expand their Polisar repitoire or for those purchasing their first recording by the artist. Polisar explores being compared to the perfect child who lives next door ('He Eats Asparagus, Why Can't You Be That Way?), playing parents against each other ('Mom Said No, I Said Why'), and having responsibility for a young sibling ('Go and Hush the Baby'). The lyrics almost always speak to the reality of children's lives. The production is high quality. ' --School Library Journal 'Barry Louis Polisar is a one-man symphony of comic anarchy. At a time when vast numbers of our kids see school as endless drudgery, Polisar says otherwise. He says, isn't the English language fun?' --The Baltimore Sun, Baltimore,MD "Barry Louis Polisar is a delightfully subversive antidote to Mr. Rogers' -- Tom Lehrer Barry Louis Polisar is a 4-time Parents Choice Award winner whose work has won numerous other awards (including two Emmys for an educational TV show he hosted). He has written and published ten books, many videos and over a dozen collections of his songs. Barry has performed at The White House, The Smithsonian, The Kennedy Center and in schools all over the US and Europe.

Here's what you say about
Barry Louis Polisar - Family Trip.

1) It's My Mother and My Father and My Sister and the Dog
2) We Don't Have to Share
3) My Brother Threw Up on My Stuffed Toy Bunny
4) He Eats Asparagus Why Can't You Be That Way?
5) But I'm Just Thirteen
6) Go and Hush the Baby
7) Oh No I Like My Sister
8) I Sneaked Into the Kitchen in the Middle of the Night
9) Mom Said No So I Said Why?
10) When the House Is Dark and Quiet
11) Aunt Anna Came to Our House
12) I Miss Grandma
13) Early Sunday Morning