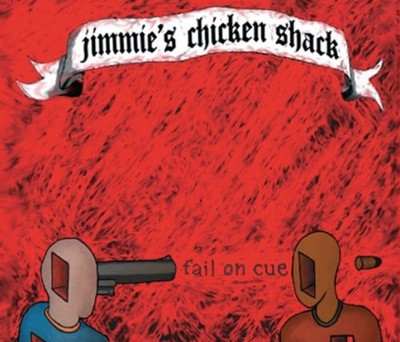 No question Jimmie's Chicken Shack is one of the hardest working bands in the business having toured constantly since 1995. Between headlining their own tours in the US and Europe they've been out with bands such as Live, 311, Creed, Fuel and Everclear. They shared festival stages with nearly every major alternative rock band and many that disappeared without trace. Unstoppable, Jimmie's, or The Shack, as they are known to their fans, just released this eighth album, Fail On Cue, on Fowl Records. The bands first major label single, High, from the 1997 album Pushing the Salmanilla Envelope climbed the charts for twelve months eventually coming to rest in the top 10 of the active rock charts with heavy rotation in MTV's buzz bin. Do Right, Jimi's ode to an ex-girfriend from the second Rocket album, Bring Your Own Stereo was also crowned, buzz clip, by MTV and again took up residence in the alternative rock charts for a year resulting in yet another top ten hit and ultimately crossing over to top 40 playlists. There have been many changes in personnel over the years and this new lineup is the most powerful yet, drawing from the cream of mid-Atlantic bands. But the absolute has always been Jimi Haha's dynamic stage presence, his exciting, eccentric melodies, riffs and chord changes and his biting, often ironic lyrical take on life. It's all about the music and the performance for Jimmie's Chicken Shack who, despite selling millions of albums on major labels, will never bend to fit.

Here's what you say about
Jimmie's Chicken Shack - Fail on Cue.