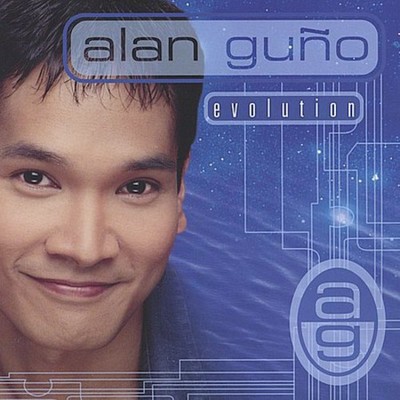 Alan Guño, one of the hottest new artists on the pop music scene, has a package of high-energy pop music and heart-wrenching ballads headed your way! His much-anticipated debut album, Evolution, is available now! NOT YOUR ORDINARY POP STAR... This extraordinary young man doesn't live the expected life of a pop singer. In fact, being a musician is only a portion of his inspiring story! 'In a word: Balance... I have never believed that you should be limited to being one thing, or to having just one dream,' says Alan. 'I don't think that life should have those kinds of limits placed on it... It's your life. And you only have one. You can't spend that one life not trying everything you've ever wanted to do. I know it sounds crazy, but I've found it to be one of those great truths in life.' Crazy or not, Alan puts his money where his mouth is. For one thing, his music dreams have always co-existed with his educational goals. And with business degrees from two of the country's leading universities, he also has found success in a finance career in corporate America. Says Alan, 'Even though I have a musician's soul - that's not all I am.' But Alan's unique life experiences allow him to bring a very different perspective to his music. 'I realized that you can't spend your life sitting down - and that you must actively reach for every dream that is important to you.' SO WHY POP MUSIC? So why would someone like this pursue a career in pop music? Alan laughs at this question, but obviously loves to answer it. 'Unfortunately, there is this stereotype of pop music as being 'throwaway' or 'disposable'... I just don't believe that music should be criticized in that way. It's music! ... I write and sing and listen to the music I love - and that happens to be pop music... People may think that makes me less intelligent or less cultured - Fine, they can think what they want. They can look at my education or my business experience and other things like that, and say that I should only be interested in certain types of music... But I love pop for what it does for me. And that is what I want to share with my audience. So that's what I'm going to do...' THE EVOLUTION OF 'EVOLUTION' The story of Evolution is one of moving past one's doubts and fears. 'I wanted to show people that it is a great thing to pursue your goals - no matter what,' says Alan. But with that in mind, the title track of the album took on a very different feel after September 11. 'Like most people, I had a really tough time dealing with the attacks... But the song 'Evolution' is about people rising above even the worst circumstances... And as much as we should remember those who sacrificed so much on that day, this song is for those who remain - a reminder that we should still celebrate life and honor those who were lost - by being alive and living as fully as possible... In a way, you could say that this song is not about September 11, but rather - about September 12...' The tracks on 'Evolution' reflect that same spirit. From the hopeful pop of 'Forever Your Angel' and 'Let Them Say' to the aggressive power of 'On The Prowl' and 'Dragonslayer' - to the stirring emotions of 'The River' and 'The Things I Need to Say' - Alan's debut album reflects life as the adventure it should be!

Here's what you say about
Alan Guno - Evolution.