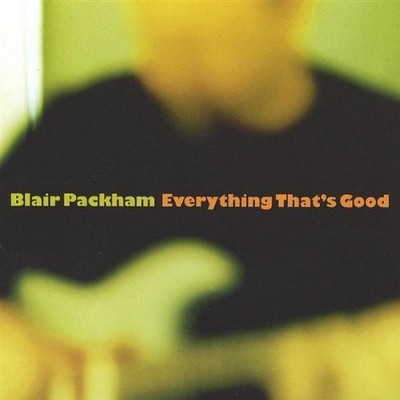 A pop song should be nothing less than a three-minute statement on the here and now; with EVERYTHING THAT'S GOOD, Blair Packham serves up ten great pop songs you've got to hear -- now. The affable singer songwriter is perhaps best known in Canada as the voice of EMI recording artists The Jitters, who had a string of Canadian-chart topping singles like 'Last of the Red Hot Fools', 'Til The Fever Breaks' and 'The Bridge Is Burning' between 1987 and 1991. Parting ways with The Jitters in the early 90's' Packham has thrived in Toronto's music scene, producing and engineering other artists and playing the occasional solo show. The majority of these past few years was spent songwriting, in the pursuit of the perfect hook, which Packham then sought to give lyrics that actually spoke to his own life. 'I try to write stuff I'd want to listen to,' says Packham, 'pop songs with a story to tell,' not unlike the work of his influences, Elvis Costello and The Beatles. Contemporaries Blair admires include The Odds, Martin Sexton, Mia Sheard and Fastball. 'I hope I write songs that are meaningful to me, but still have some sort of universality. I like pop melodies and sounds, but I have to believe the singer has a stake in the lyrics. That said, I'm not a fan of overly earnest, singer/songwriter stuff; I like songs with attitude, with some humor.' There's plenty of attitude on EVERYTHING THAT'S GOOD. Free of the limitations a band can impose, this is a harder-edged and decidedly more personal introduction to Blair Packham's singular vision...and like all good pop visionaries, he gets by with a little help from his friends. 'After years of working on my own and calling all the shots,' Packham says, 'I'm really excited by collaboration these days, especially with the people who worked with me on my album.' Musically, excitement comes courtesy of The Odds drummer Pat Steward andSupers/Starling bass player Maury Lafoy with loving contributions by good friends like Ron Sexsmith, Paul Myers, Kurt Swinghammer, and Craig Northey. Packham is also joined here and there by acclaimed singer/songwriter Arlene Bishop. Having produced two recordings for Bishop, (1996's 'Pinky' and the current 'Snarky Girlpop') Packham's real-life partner, returns the favour by cowriting three of the album's songs. She is also the inspiration for EVERYTHING THAT'S GOOD's emotional centrepiece, 'She Just Is'. EVERYTHING THAT'S GOOD was recorded in Toronto in 1999/2000 where Packham co-produced the sessions with Juno Award winner Michael Phillip Wojewoda (Barenaked Ladies, Jane Siberry) and Jeremy Darby (Lou Reed). Quotations/Testimonials, Etc.: 'If showbiz was a meritocracy, Packham's Everything That's Good would be a Top Ten hit' James Cowan, The National Post 'Former Jitters singer Packham has a knack for intelligent, hooky tunes that fans of Elvis Costello, Matthew Sweet and ilk should make every effort to seek out. Great playing, tight songs and lyrics make this release a winner.' Stuart Derdeyn, The Vancouver Province 'One of my faves from the year, and the gift I'm giving to most of my friends...Everything That's Good is exactly that from one of Canada's best unsung pop writers, Blair Packham.' Ross Porter, CBC Newsworld 'On the Arts' 'Clever-clever, lyric-driven pop with a chip on it's shoulder. Music made by people who can really play their instruments. Packham's new disc, Everything That's Good, rocks.' Kim Hughes, Now Magazine 'A superb solo album.' Kerry Doole, Tandem Magazine 'A great collaboration of sound...An album to remember from a great Canadian artist.' Veronica Dean, The Gate 'Hey Blair, I love your disc! We play it in the dressing room before our shows...' Ed Robertson (Barenaked Ladies)

Here's what you say about
Blair Packham - Everything That's Good.