Preschool of Rock - Everything Makes a Sound 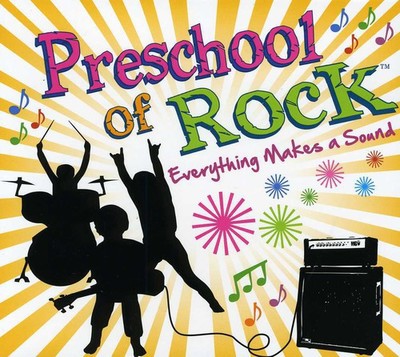 Building on the momentum of their 2012 Parents' Choice® winning album, Dance Party, Preschool of Rock charts new kids' music territory - defining life as rhythm - with the December 4 release of their third studio CD, Everything Makes a Sound (Preschool of Rock Records, for ages birth - 8, run time 33 minutes). Everything Makes a Sound, features singer/songwriter and multi-instrumentalist Michael Napolitano who, as a second-generation drummer, lives and breathes rhythm. Michael, founder of the popular New Jersey-based Preschool of Rock music classes, is well aware that rhythm, an intrinsic aspect of childhood from patty cake to jumping rope, provides the motor for individual development and a framework for social connections with other kids. With songs like the album's title track (in which no traditional instruments were used), "Shake It," "And We Dance," and "Jump When I Get Up," Everything Makes a Sound focuses on bringing rhythm into family activity at a time in history when too many kids are being introduced to the sedentary operation of electronic devices at an early age. Even the "cool down" songs on this album have an undulating, rhythmic pulse. For example, the alt country/blues "A Little Breath In" is all about breathing, the most consistent rhythmic activity in life. Michael Napolitano grew up in a home filled with music making. From an early age, Michael equated music with family. His dad, Tony Napolitano, had several top 10 hits as drummer with the ?50s doo-wop group, The Ideals. This band toured with Fabian, Frankie Avalon, and Joey Dee and the Starlighters, opened for Count Basie in Jersey City, and played the Jerry Lewis Telethon. Tony later joined the sensational doo-wop band Chang Lee & The Zani-Acts & The Yum-Yum Girls, performing alongside a young Joe Pesci, who sang first tenor. Surrounded by all things musical, Michael found it easy to teach himself to play more than ten instruments. He reminisces, "I just soaked it up, like a sponge. My brothers and I were lucky enough to be able to watch our dad in rehearsal with the different bands he played in. Then we'd sit at the drum kit or bang on the Hammond organ. These were my biggest influences." He continues, "I not only grew up exposed to a tremendous amount of live music, I've also been listening to records for as long as I can remember. When I was three years old, I'd hide with the Fisher Price player, spinning record after record, and I wasn't listening to Peter Pan or Disney records! Of course, we had those, but I preferred to dig through my parents' collection to find Billy Joel, Cat Stevens, Neil Young, and early Chicago." With memories of his earliest musical experiences prominent in his mind, Michael Napolitano wanted to make a Preschool of Rock record for what he calls "the me of 30 years ago," a boy who, even when very young, wanted to hear tunes with a more sophisticated voice, in different styles and genres. On Everything Makes a Sound, he's included tribal rhythms ("Safari Song"), indie melodic hooks ("Shake It"), and even punk beats ("Cupcake Song"). Michael also wanted to pay tribute to his parents and the important of family. A special moment on the album comes when his dad sings on "The Family Song, " joined by the rest of the family and a few close friends. This marks the first time Tony Napolitano has sung on a track since he performed with The Ideals in the ?50s. - more - Another tremendous influence on Michael Napolitano's music was his association with Blue Man Group. He spent eight years in the organization's creative production department, working closely with it's founders in the areas of music, sound, and research & development. Michael's experiences with Blue Man Group during this period of dramatic growth and creativity - making records, traveling the world, and collaborating with world-renowned artists - have had a major impact on his Preschool of Rock recordings and on the props and instruments he now uses in Preschool of Rock music classes. Michael was later hired by Chris Wink, co-creator of Blue Man Group, to pioneer a music program at The Blue Man Creativity Center (now the Blue School) in NYC. The school bases it's pedagogy on the Reggio Emilia Approach, and Michael brings his knowledge of this "Responsive Classroom philosophy" to his work with Preschool of Rock. Preschool of Rock has previously released two albums: Dance Party (2011) and When I'm Jumpin' (2010).

Here's what you say about
Preschool of Rock - Everything Makes a Sound.