Patrick Glenn - Everything But the Words 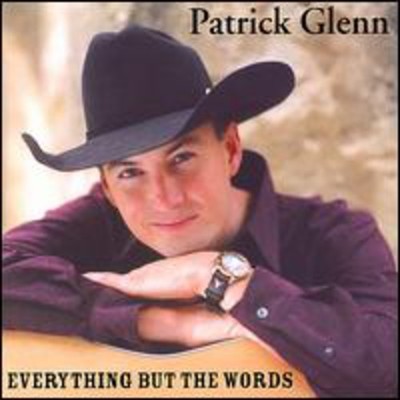 Patrick Glenn, the brand new upstart from San Antonio, Texas has his act down. Growing up in San Antonio and Nashville, Tennessee briefly, he sang to everything on the country radio and was known for sometimes singing the commercials too. So it's no surprise that he's still at it today. Though he admits to having taken a few detours along the way, his goals and dreams never changed, and as steady goes the course, this young man creates quite a stir everywhere he goes. Now, 31, he's matured a little through his life experiences, and he could very well be the next Texas singing sensation. No matter if it's Merle Haggard, Alan Jackson, or any number of the country singers and traditionalist that you choose, this guy has got a bit of all of them in his style. He understands you've got to pay your dues, and he's done quite a bit of it, from singing in a military bar at the age of 20, to touring all over south Texas to perform at the dancehalls, he now maintains a busy schedule of 150 plus shows a year combined with his role as a full-time single father of two young children. His debut CD entitled 'Everything but the Words' exemplifies his style of expression. You never know what's going to come next on this CD. From 'All Roads' to 'I'll Be Waiting' you'll get a variety of styles of country music, and scenarios for love lost and gained, or in some cases utter confusion. There's even a new perspective and angle from the supercharged true commitment song 'I Ain't Leaving'. You surely won't be disappointed with the musicianship on the CD. Patrick gathered a 'south Texas all star session' on his first time out. It's literally what you get when you cross The two best 'Road Bands in Texas', and then if that wasn't enough he threw in a few wild cats like John Carrol and Kenny Grohman to intensify the mix a bit. Patrick also managed to garner some pretty heavy hitters in the songwriting field too. He proudly stated, 'I can't believe I got a songwriter on my CD who has lyrics hanging in the Country Music Hall of Fame!' He's referring to John Ims and his big hit 'She's In Love With The Boy' for Trisha Yearwood, but the hit makers don't end with Mr. Ims, also on board this debut CD are Jim Lauderdale and Rich Fagan, author of 'Sold', 'Be My Baby Tonight', and 'Overnight Male'. Among these current powerhouse songwriters you'll find cuts penned or co-penned by the late Harlan Howard, Dean Dillon, Jim McBride, Keith Gattis, Curtis Wright, Benny McArthur, Rick McRae, David Anthony, Jeff Carson, Melba Montgomery, and Leslie Satcher. The talent in this package is absolutely nothing short of exciting, so sit back, put 'Everything but the Words' in your CD player, and there's no doubt by the end you'll be wanting to hear more of Patrick Glenn.

Here's what you say about
Patrick Glenn - Everything But the Words.