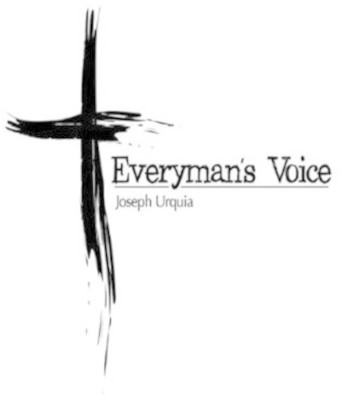 Joseph Urquia'a first CD release, Everyman's Voice mirrors his musical heritage, beginning with his Latin roots, and continuing through a lifetime of listening to the voices of his generation, from Bill Haley and the Comets to Neil Young and Crazy Horse. The echoes are all there and each cut will bring a smile to your soul and a whisper to your ear. 'My faith, my experience with God and his Son, my ironclad belief in his Holy Spirit, all are central to my music'. So says the Chiropractor turned balladeer. What began as a family band inspired by a local music academy, morphed into a full-fledged obsession with producing the best Christian album ever produced on the Olympic Peninsula, home to Joseph and his family. 'People laugh when I tell them I was at Woodstock, but it's true, I spent four pretty miserable days listening to music which stuck in my mind and heart forever. The mud and weather may have been miserable, but the tunes were timeless. After I accepted my Master, the words and music just flowed, filtered through a prism which reached a kind of culmination all those years ago.' The first two cuts on the album, Player and Born Again Believer are good examples of this. 'I got the idea for Player when I read that certain sharks would not attack a person in the water, while others invariably would. The researcher called the peaceful sharks, players. Yeah, I thought, that's the kind of player I want to be.' Born Again Believer starts out exalting the Christian mindset, but ends up asking what it all means if that one key ingredient of the Master's is missing: love. When asked about the title, Everyman's Voice, Joseph can only smile and say, 'Hey, like I wrote on the back of the CD, we all have a voice. It doesn't have to be the kind people worship as great, it only has to be willing to be surrendered to the love of the Father, that's what's precious to His ears.' After listening to Everyman's Voice, I think you will agree.

Here's what you say about
Joseph Urquia - Everymans Voice.