The Gnomes - Everybody Must Get Gnomed 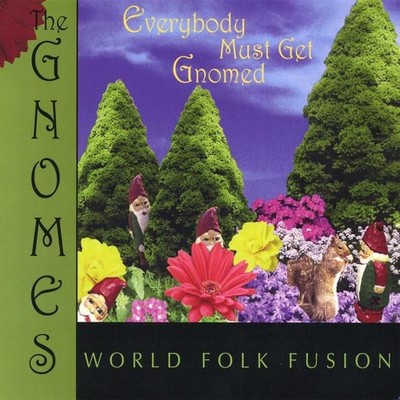 The Gnomes play an energetic blend of world music, gnomishly arranged traditional folk tunes as well as original music. Instruments include: fiddle, button accordion, Irish tin whistles, guitar, bass, keyboard, vocals, and percussion of all kinds. Take a 'whirled tour' and get gnomed with their second CD, 'Everybody Must Get Gnomed.' ------ 'Everybody Must Get Gnomed' The cover of this album says 'world folk fusion' right on it. Fusion makes me think of two things: jazz, and food. Jazz, according to Wynton Marsalis, is a negotiation. And while 'Everybody Must Get Gnomed' is not necessarily jazz, The Gnomes have negotiated a beautiful and broadly international feast here, with ideas, decisions, temperance and turns that keep a brisk, organic pace. Folk or traditional songs that transcend their roots as dance and work music have usually done so by masking their syncopation in free-flowing melodies on diverse solo instruments such as fiddles, guitars and, most notably here, whistles. But the steps are unmistakable and I challenge anyone to allow their gait to be broken while walking down the street with the disc's opening medley playing on their headphones. 'Hasidic Melody' finds the innate joy in mysticism by segueing into a pair of Irish jigs; the softly distorted bass brings the stomp to 'Boys of the Lough/Monaghan Twig' without sacrificing any of the Gnomes' delicate interlocution. From the refined blues of Roscoe Gordon's 'Sit Right Here,' on which Peter Breen brings an arching clarity to the vocal, it's on to the next course, a tango. Then a tarantella. Than back to the tango. The next course is a polka, then a flamenco polka! Whoa, back up. Who are these guys, and where are they getting these combinations? They are: Peter Breen on bass; Cathy Clasper-Torch on fiddle, erhu, keys and cello; Phil Edmonds plays the accordion and the whistles; Otis Read is on vocals and guitar; Ron Schmitt plays every form of percussion known to mankind, some guitar, and some bass. Now that you've met the chefs... Positioned near the center of the album and among only a few tracks to stand alone and apart from a medley, 'Imagine Peace' is clearly the main course. A penetrating meditation for accordion and whistle, it is swayed along by a windy keyboard refrain keeping waltz time. Dessert starts with a pair of tributes to Otis Read's time spent living in Umbria, Italy. 'Via Umbria' is a guitar and cello driven tune that breaks behind a whistle that dances deliberately over the track like a time-lapse sunrise on a few dozen yards of olive trees. These are both Otis Read's compositions and he lays a reserved vocal treatment over the Tropicalia-inflected 'You've Got A Home.''Waterfall' is a tribal rhythm behind a series of ascending Western scales, accented by a few Stephane Grappelli-esque violin turns and the meal is nearly over: All that's left is ceremony.'Finn Yenta' is a quick Norwegian waltz led by violin into the album's ceremonial closer: 'The Light and the Spices' a Sephardic hymn to the Jewish ceremony of Havdalah, which is performed on Saturday evenings to conclude the Sabbath. The light is warm on 'Everybody Must Get Gnomed,' but it's the spices that resonate: exotic, fresh and unique. BY G.W. MERCURE Motif Magazine, November 2008.

Here's what you say about
The Gnomes - Everybody Must Get Gnomed.