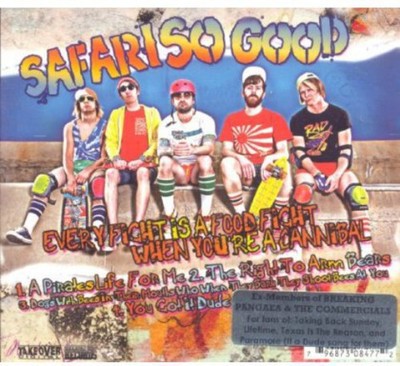 Safari So Good is a band from Harrisburg, PA that rocks, rolls, isn\'t afraid to have fun, doesn\'t take themselves too seriously, and never kisses on the first date. The band contains past members of Breaking Pangaea (Equal Vision Records), and The Commercials (Blackout Records), both of whom toured extensively, and accomplished a lot (past members of Breaking Pangaea went on to join Taking Back Sunday, Straylight Run, and The Color Fred). \'We used to play together a lot.\' says guitarist Tony Bavaria, \'So when The Commercials broke up, and we decided to start a new band, we thought, \'Who is a sick bass player that isn\'t doing anything right now?\', and Mike from Breaking Pangaea was the first person to come to mind. Plus he jumped around on stage a lot.\' Safari So Good is now ready to start where their past bands left off. Blending influences from bands like Texas Is The Reason, Lifetime, and The Promise Ring, with more modern pop sensibiliities, they\'ve been taking the east coast by hurricane (a little more serious then just taking it by storm). They\'ve even brought the rock gospel over seas with a UK tour in 2007. With a new EP entitled \'Every Fight Is A Food Fight\' being released on Takeover Records (Ben from Yellowcard\'s label) this summer, the boys are ready to keep the momentum going. They have upcoming U.S. and Japan tours scheduled for 2008, and plan to keep writing and recording for future releases to come. \'

Here's what you say about
Safari So Good - Every Fight Is a Food Fight When You're a Cannibal.