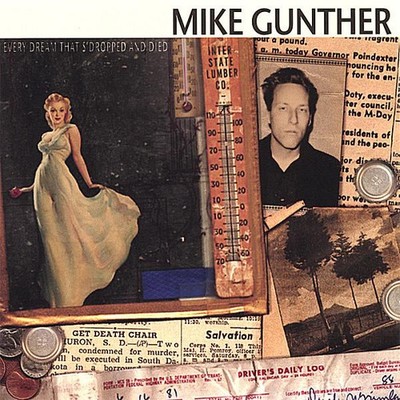 In his first year of seriously performing, 26 year old Mike Gunther has become a fixture on the Minneapolis music scene, performing both as a solo artist and with his combo The Restless Souls. Since June 2002, Gunther has shared the stage with several notable acts, including Eleni Mandell, Richard Buckner, Chuck Prophet, Bob Log III, Shannon Wright, the Frogs, and Har Mar Superstar. At the end of 2002, Gunther recorded a four song demo CDR, which instantly began receiving heavy airplay on the University of Minnesota's highly influential radio station Radio K (KUOM 770 AM). By February 2003, all four songs from the demo were still on Radio K's playlist. Gunther was invited to perform live in-studio on Radio K's 'Off the Record' program, as well as the 'Local Sound Department' show on KFAI (90.3 FM, Minneapolis), and filmed a live performance and interview for Video K, Radio K's biannual video magazine, which aired on Twin Cities public television (KTCA, channel 2). Legendary Minneapolis rock club First Avenue invited Mike Gunther and His Restless Souls to perform at it's 'Best New Bands of 2002' showcase. Most recently, Gunther was named 'Best Songwriter' by Minneapolis news and arts weekly City Pages in their annual 'Best of the Twin Cities' issue (April 2003). Heart of a Champion is thrilled to release Mike Gunther's debut CD, Every Dream That's Dropped and Died. From the beginning of the opening track ('Redemption #4'), with Gunther hollering into an aluminum lampshade in a Neal Cassady/Captain Beefheart stream of consciousness sermon before erupting into a shouting frenzy reminiscent of Screamin' Jay Hawkins, Gunther suffuses his diverse musical passions and influences. When the energy of the opening track smoothly transitions into the short and sweet Willie Nelson style ballad 'Where (the Hell) is Fruita, Colorado,' it becomes evident that Every Dream That's Dropped and Died is an album that will map a journey through the wasteland of progress, and in turn create a unique Americana sound more closely aligned to Harry Partch, Flannery O'Connor and Carl Sandburg than to Gunther's 'folk/rock' contemporaries. Especially evocative of Partch's spirit is Gunther's use of 'found instruments' such as the oil drum and rusty chains used as percussion on 'Have Mercy,' 'Vermillion,' and on the standout 'Last Will and Temperance.' Other highlights include the road tale 'Eight Bridges on the Allegheny,' the infectious traditional country song 'Hard Hearted' (written by Restless Soul Suzanne Scholten - the only song on the album not written by Gunther), the Dylan-esque declaration 'What I Don't Want to Know (I Don't Want to Know),' and the stunning and haunting closer 'Outside Dutchtown.'

Here's what you say about
Mike Gunther - Every Dream That's Dropped & Died.