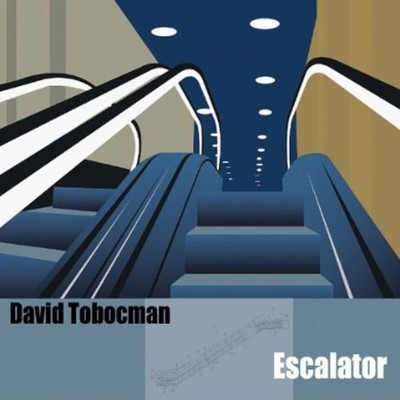 Songwriter David Tobocman's third album for children is a celebration, a rousing set of high-energy songs about the excitement of growing up. Rocking and straightforward with an emphasis on movement, Escalator is infused with a "let's go" spirit and true sense of fun. There's a song about a young race car that dreams of hitting the open road and one about a family camper that can travel through space. All through Escalator, David presents the theme of striving and advancing, urging kids onto life's great adventure, to "move on up" with optimism and spirit up the great big escalator and "if you're going down, then use the stairs." Always witty and engaging, David's playful songs for children show the craft that he's developed as a career songwriter and composer. When not recording and performing for kids, David writes scores for indie films and TV shows (currently penning songs for the animated series, Robot and Monster). After years working behind the scenes, the birth of two daughters inspired his first album for children, the stylistically diverse I Count to Ten and other Very Helpful Songs, which gained critical acclaim and fan interest off of the deeply affecting ballad, "Home" and it's accompanying video. Another album followed, Lemonade School, with it's jukebox of musical styles from rock to folk and bluegrass to rap to story-songs like the title track, about a talented boy who coyly refuses to share his recipes, later opening a culinary beverage school instead. The characters that populate David's songs are intelligent kids who are not afraid to be different. "Kids are smart," says the songwriter. "I just try to meet them at their level." The child narrator of "Born to Rock" with jeans that are "worn, tattered and torn," looks back fondly on his "long gone rebel" babyhood rockin' in Mama's arms and on Daddy's knee. The kid in the recycling anthem, "Gonna Be a Garbage Man" speculates that he might one day "dream up the perfect, clean renewable fuel to power up the world." The child that visits the White House in "America's Our Country" knows one day that could him be sitting in the Oval Office. These are clever kids with open hearts and big dreams. David sings their stories with compassion and enthusiasm in a friendly, plain-spoken voice that rings with authenticity. With an approach that suggests an updated version of classic children's music like Raffi or even Mr. Rogers, David's music "bucks the current trend of harder-edged kids' music in favor of tuneful melodies and sweet, memorable songs," writes one blogger about Lemonade School. It's an apt description and one that is immediately appealing to parents and children alike. Making records for children in the Tobocman household is a family affair. The two Tobocman daughters sing and provide dialog throughout Escalator while the eldest has co-written songs on all three albums. With the arrival of his first CD in 2008, David and his enterprising wife, KC Mancebo created Clamorhouse Kids, a children's music label dedicated to providing independents with distribution and promotion, a label that KC now runs. Finding out quickly that a single independent recording artist lacks the clout to gain interest from distributors, the couple decided to create an umbrella group so that like-minded independent kids' musicians could band together as a collective to gain entry into the established network of distributors. Escalator's theme of forward motion ends with "Big Train," a trad-styled fingerpicked guitar train song that trails off with a lonesome whistle blowing, riding off into the sunset. With three full albums of songs for kids now in his catalog, David Tobocman (pronounced Tuh-BOCK-man) is a locomotive with a trainload of music for young ears, with no signs of slowing either. "The next album, already half-written, is Gonna be Great... that's the name of title track."

Here's what you say about
David Tobocman - Escalator.