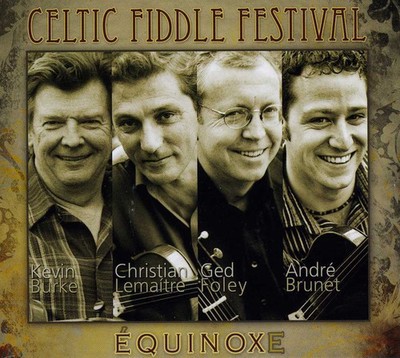 Celtic Fiddle Festival artist profile Music of Ireland, Brittany and Québec 'Three sensational fiddlers from three distinct Celtic traditions. Breathtaking!' Boston Herald Kevin Burke (Ireland), Christian Lemaître (Brittany), André Brunet (Quebec) and Ged Foley (UK, Ireland) on guitar 'Mesmerising, plaintive, celebratory and winsome in turn...Celtic Fiddle Festval ratchets up the temperature as they ricochet through everything from magnificent Québecois tunes to Breton marches to the Irish tradition." So writes Irish journalist Siobhán Long in The Irish Times. Sold-out tours and standing ovations give further testimony to the electricity and excitement generated by these three great individual fiddle stylists. Kevin Burke (Ireland), Christian Lemaître (Brittany, France) and André Brunet (Québec) combine their talents, musical traditions, and spontaneous humor for an evening of dazzling energy and subtle grace. They are joined by acclaimed English musician Ged Foley on guitar, providing both driving accompaniment and delicate solos. Called 'three of the finest folk violinists anywhere' by The Washington Post, Celtic Fiddle Festival will release their fifth CD, Equinoxe, in February 2008. A harvest of international tunes, the new album celebrates the possibilities of the violin in all it's globe-trotting variations. It is their first on Burke's new Loftus Music label, after a string of acclaimed recordings on Green Linnet. In a Celtic Fiddle Festival live performance, these traditional masters showcase their regional repertoires and conjure an experience of breathtaking performances. Kevin Burke, considered one of the finest Irish fiddlers of his time, is known for his inimitable feel and silky tone on the swiftly rolling music of County Sligo. Lemaitre brings his unerring control and the hypnotic, modal melodies of the Breton fest-noz or "night-dances." And newest member Brunet, tilting the band's sound with a Francophile flair, fires up the night with his exuberant smile and percussive, foot-stomping Quebeçois tunes, punctuated by an occasional yelp! The evening builds to a collaborative set featuring all four musicians. Music from Ireland, Brittany, Quebec, Scotland, Italy, Sweden and elsewhere are woven into complex, fascinating arrangements with the delicacy of a chamber quartet or the rip-roaring force of an international hoe-down. Together, these virtuosic musicians play with such relentless precision and passion that the tunes transcend all cultural and geographical barriers, leaving the audience with a memorable musical experience. Conceived as a unique touring project in 1992 with Burke (of Ireland's seminal The Bothy Band), Lemaître (Kornog, Penou Skoulm), and the late Scottish fiddler Johnny Cunningham, the original foray proved a resounding success. A live album Celtic Fiddle Festival (1993, Green Linnet) was released to glowing critical reviews and impressive international sales. The ensemble went on to put out two more albums and make numerous international tours, becoming one of the most popular on the Celtic circuit, before the untimely death of the beloved Cunningham in December 2003. With an upcoming tour upon them, the remaining members of the group were left with an unimaginable hole to fill in their hearts and in their lineup. In stepped Brunet, a young French-Canadian fiddler (and then a member of legendary group La Bottine Souriante), and his lively Quebeçois dance tunes and contagious enthusiasm lifted both tempos and spirits. 'Once the tour got under way it quickly became evident that inviting Andre along was an inspired decision," says Kevin Burke. "There was great excitement in the music, we enjoyed each other's playing immensely and it was evident from the audience response that they too felt they were witnessing something special. We missed Johnny terribly, but we liked to think he was out there grinning down on us, wishing us well and exhorting us to 'play on'." Indeed, the tangible chemistry of the new Celtic Fiddle Festival led to a new live CD, Play On (2005, Green Linnet), recorded at the end of that first tour and dedicated to the memory of Johnny Cunningham. Now with their new CD, Equinoxe, Celtic Fiddle Festival plays on with a fascinating juxtaposition of fiddle styles. As Irish writer Siobhan Long concludes, "If sweeping, untrammelled bowhands are the stuff of your dreams, [Celtic Fiddle Festival's] rewards will be ample.'

Here's what you say about
Celtic Fiddle Festival - Equinoxe.