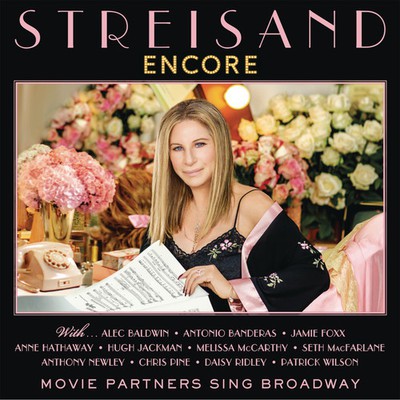 2016 release. The greatest star to ever come out of Broadway, Barbra Streisand returns to her roots with Encore: Movie Partners Sing Broadway. This album includes duets with Alec Baldwin, Antonio Banderas, Jamie Foxx, Anne Hathaway, Hugh Jackman, Seth MacFarlane, Melissa McCarthy, Anthony Newley, Chris Pine, Daisy Ridley, and Patrick Wilson. The legendary performer rose to unprecedented fame while starring on Broadway with her stage debut in I Can Get It For You Wholesale and then as comedienne Fanny Brice in Funny Girl. With the longest span of #1 albums in history - six decades - Streisand has recorded 52 gold, 31 platinum and 13 multi-platinum albums in her career. She is the only woman to make the All-Time Top 10 Best-Selling Artists list. With the release of her last album, Partners, Streisand has had 33 albums make the Top 10 on the US charts. Streisand is the female artist with the most #1 albums in Billboard's history. Streisand has attained unprecedented achievements as a recording artist, actor, concert performer, producer, director, author and songwriter. She has been awarded two Oscars, five Emmys, ten Golden Globes, and eight Grammys.

1) At the Ballet - with Anne Hathaway ; Daisy Ridley (From a Chorus Line)
2) Loving You - with Patrick Wilson (From Passion)
3) Who Can I Turn to (When Nobody Needs Me) - with Anthony Newley (From the Road of the Greasepaint the Smell of the Crowd)
4) The Best Thing That Ever Has Happened - with Alec Baldwin (From Road Show)
5) Any Moment Now - with Hugh Jackman (From Smile)
6) Anything You Can Do - with Melissa McCarthy (From Annie Get Your Gun)
7) Pure Imagination - with Seth MacFarlane (From Willy Wonka and the Chocolate Factory)
8) Take Me to the World - with Antonio Banderas (From Evening Primrose)
9) I'll Be Seeing You/I've Grown Accustomed to Her Face - with Chris Pine (From Right This Way / My Fair Lady)
10) Climb Ev'ry Mountain - with Jamie Foxx (From the Sound of Music)