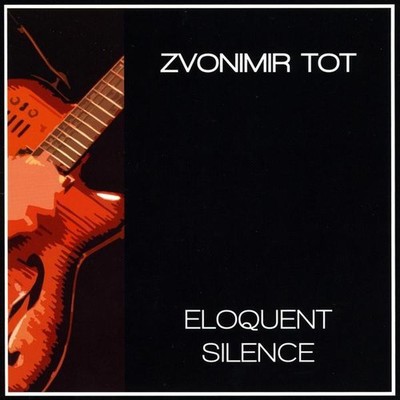 Zvonimir Tot - guitar; Larry Gray - double bass; Ernie Adams - drums; Orbert Davis - trumpet, flugelhorn; Mark Colby - tenor saxophone; Julie Koidin - alto flute; Stefan Milenkovich - violin. Recorded 3/24 and 3/25/2009. Produced and engineered by Nick Eipers. REVIEWS: "'Eloquent Silence' is an introspective yet powerful album by Chicago guitar virtuoso Zvonimir Tot. The album features an all-star band... Bouncing between hard-driving funk tunes, laid back ballads, rock-inspired grooves and Latin beats, Tot's compositions spin a web of musical eloquence that is both engaging and intellectually provocative... Each tune on the album reflects a different side of Tot's compositional palette. While Tot is firmly based in the modern jazz tradition, he also borrows heavily from other genres including funk ('Bruce's Dilemma'), rock ('Mira's Do-Re-Mis') and bossa-nova ('Sub Rosa')... Tot's virtuosic chops and strong sense of melody shine throughout... Eloquent Silence is an entertaining jaunt through the myriad of Tot's musical influences and favorite genres." - Matthew Warnock, AllAboutJazz.com "...a fantastic guitarist who has surrounded himself with some of the most sympathetic support anyone could ask for anywhere. Tot keeps one-upping himself with every disc he puts out, and 'Eloquent Silence' is a fantastic example of just how brilliant a guitarist, writer and arranger he is." - Paul Abella, Chicago Jazz Magazine "A much-in-demand player, Tot enlists some of the cream of the crop of Chicago artists on his second album as a leader, and it is the delicious interplay between the guitarist and his fellow players that gives this release much of it's energy. Masterfully balancing his own exemplary solos with those of such talented players as bassist Larry Gray, drummer Ernie Adams, trumpeter Orbert Davis, flautist Julie Koidin and tenor saxophonist Mark Colby, Tot creates a simmering musical environment that allows everyone involved to present themselves to great advantage... highlights include several brilliant solos from Gray (check out his incredible bow work on his solo on 'Mira's Do-Re-Mis' a perfect complement to Tot's fiery guitar), Colby's sensitive playing on the ballad, 'Jurre,' Adams (who plays excellent support as always) provides a couple incendiary solo spots, and Serbian classical violin prodigy Stefan Milenkovich adds a romantic gypsy feel to the haunting 'Sarabande Blue.' Another compelling release from Chicago Sessions..." - Brad Walseth, JazzChicago.net "... The trumpet and sax work by Orbert Davis and Mark Colby, respectively, is right on the money, and violinist Stefan Milenkovich adds some Eastern European flavor on 'Sarabande Blue'. Tot himself is diverse, selective and a master of the strings." - George W. Harris, JazzWeekly.com "When he improvises, Zvonimir evidences many things, from the intensity of a conservatory virtuoso to the serene patience of a Zen guru, and always, the love of lore that characterizes griots and troubadours the world over. Jazz musicians have long used storytelling as a metaphor for improvisation, and Zvonimir's solos exemplify that concept. They start here and get to there; in between lies the wealth of color and detail shared by narrators from Chaucer to Updike. So keep an ear open for that quick descent into a blues cellar, or that unexpected detour into a Balkan village, or the volcanic burst of activity on which the entire plot might turn: you're likely to hear all those and more, even as these improvised stories barrel on with clarity and power." - Neil Tesser (from the liner notes) BIO: Zvonimir Tot is a jazz guitarist, composer, and arranger with a style deeply rooted in the jazz tradition but flavored by his European origin. He holds way too many university degrees. Tot is the Assistant Director of Jazz Studies at University of Illinois at Chicago. As a jazz musician, Zvonimir Tot has performed and/or recorded in The Netherlands, Germany, Belgium, Hungary, Serbia, the Czech Republic, Romania, and Croatia. He has performed with many world-renowned artists, including saxophonists Scott Hamilton, Billy Harper and Peter King, organist Joey DeFrancesco, violinists Johnny Frigo and Stefan Milenkovich, drummers Ernie Adams, Paul Wertico and Byron Landham, bassists Niels-Henning Ørsted Pedersen, John Clayton and Hein Van de Geyn, trumpeter Orbert Davis, pianists Larry Novak and Larry Vuckovich, guitarists Philip Catherine, Henry Johnson and Paulinho Garcia, vocalists Jackie Allen, Carmen Lundy and Deborah Carter, and Chicago Jazz Philharmonic. 'Zvonimir Tot is the hot new voice in the world of jazz guitar virtuosos." - Judy Roberts, Chicago Jazz Magazine. '...Tot throws out some greasy guitar licks that are simply fantastic.' - Dan Bilawsky, Jazz Improv Magazine. '(Z.T.) ... is an extrovert soloist who plays from the heart. He improvises with a typical Balkan singing quality, an intense feeling for the blues, rich imagination, and unbelievably fast fingers.' - Jeroen de Valk, Dutch jazz critic, Het Parool, Amsterdam.

Here's what you say about
Zvonimir Tot - Eloquent Silence.