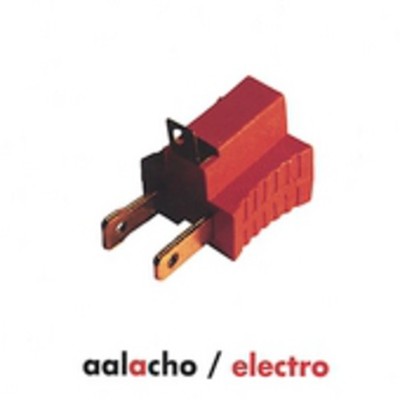 Aalacho (pronounced 'ah-lah-koh') is the electro-rock creation of Nathan Scott, a songwriter/producer working out of Seattle, Washington. Armed with a Korg, a Mac, a second hand Les Paul and a notebook's worth of arguably clever lyrics (while keeping his day-job at the espresso-shop), aalacho emerged from Seattle's post-grunge movement in the year 2000 with a lo-fi aesthetic and a decidedly avant-garde twist on European dance pop. Aalacho's debut CD, 'sugar', was released in November of 2002, and it's affectionate blend of ambient-house, retro-techno and indie-rock guitars landed it a 9 week stint on CMJ's RPM Top 20, attracting enthusiastic notice from a number of independent media outlets such as Cosmik, Groovystylie, ActionMan Magazine and Outburn, as well as garnering airplay on over 190 college and independent radio stations across the U.S. and into Canada. With it's new release, 'electro', aalacho takes it's cue from the crop of new-wave/post-punk revivalists currently energizing the electronic music landscape. Respectfully cribbing from the likes of Kraftwerk, OMD and The Replacements to create it's own audio niche, aalacho wears it's DIY heart on it's sleeve and invites the listener into an engaging world of haunting melodies, unpredictable arrangements and a surfeit of shimmering, buzzing guitars. Working a second time with New York City guitarist Sam McIlvain (Tryst, The Davenports), 'electro' also incorporates a number of Seattle musicians into the mix - guitarists Chris 'Reemus' Brown of Jasper the Cat and Derek Armstrong of the lamentably defunct The Vacants, plus indie vocalists Joe Randazzo, Trevor Hesse and Sarah Severson. Already hailed as 'a crisp and refreshing ride on the second-wave,' aalacho's 'electro' upends traditional pop structures, building efficiently upon it's more eclectic influences.

Here's what you say about
Aalacho - Electro.