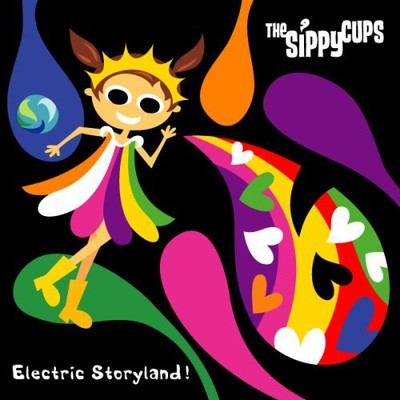 The Sippy Cups Electric Storyland Somewhere during the course of every Sippy Cups show, there is an epiphany -- a defining moment when a parent looks across a sea of twirling, air-guitaring kinder-rockers, meets the eye of another parent, and raises a pint glass in triumph. It is a moment that says, "Dorothy, we're not in Wiggles-land anymore." "I love that moment," says Sippy Cups co-founder and lead vocalist Paul Godwin. "When I see dads faces lighting up, nodding in that sort of 'yeah, man' way rock fans in the '70s used to acknowledge one another, I know we're doing something right." A typical Sippy Cups show impeccably cool rock music, juggling virtuosity, comical stunts and characters, giant puppets, and plenty of audience participation.Combining a flower power pop-rock sensibility with lyrics that are both sly and wonder-filled, the Cups have managed to accomplish in two short years what few kid-rock bands do in a lifetime: create a sound and a scene that appeals as much to moms and dads as to their offspring. With Electric Storyland, their new CD of original songs and sketches composed by all six band members, the Sippy Cups take "kids music" to a whole new level. Set in a circus-like dreamscape, the album transports audiences to a fantasyland of rockets and robots, trains and jellyfish, magic toast and sensitive superheroes. Songs such as "Move Your Pants," "Drinking from the Sky," and "Springtime Fantastic" become jumping off (and jumping up) points for unexpected musical, visual, and dance-able flights of fancy. "Meet Major Minor" and "Superguy Returns" introduce the comic characters and plate-spinning antics of juggler extraordinaire Doug Nolan into the mix. "Most kids music is rooted in the Ella Jenkins, Pete Seeger acoustic-guitar-and-a-singer mold," says Godwin, an early-childhood music teacher who has composed award-winning scores for stage and film. "We're part of a new movement of bands that are more in the indie-rock arena. It's music for kids that parents would want to go see. We do play libraries and school benefits, but we also play matinees at cool nightclubs." The Sippy Cups were born in 2004 at a community fundraiser in a coastal town just south of San Francisco, when dads Godwin, Nolan, and guitarist Mark Verlander found themselves morphing Syd Barrett's "Bike" into a freewheeling tricycle mash-up. From there, it was a natural progression to gigs where they recast cult classics by the likes of Velvet Underground, T. Rex, the Kinks, the Beatles, and the Ramones as shout-out requests for the under-eight set. Alison Faith Levy, an established Bay Area singer-songwriter and alum of indie band, The Loud Family, joined the group in 2005, along with bass player Rudy Trubitt, a noted sound designer and founding member of the Hawaiian punk band, The Squids, and veteran drummer Jozef Becker (Thin White Rope, The Loud Family). With the help of producer Eric Drew Feldman (Polyphonic Spree, Frank Black, PJ Harvey), they released a CD of their two singles, "Magic Toast" and "Snail Song" in 2005. Electric Storyland is their first original and completely collaborative full-length project. Guided by the motto "Milk, Music, and Mischief," and shaped by a profound belief in the magic of nature and the aerobic benefits of rock-and-roll dancing, the band has created a land of imagination, where children delight in being different, where snails live in enchanted pails, and where dreaded "time outs" become joyous rock anthems. Godwin and Levy teamed up for "Time Out World" and the CD's title song. Guitarist Mark Verlander drew on his background as a graphic artist (he and wife, Susan Verlander, also design all the album art) for the colorful, kaleidoscope world of "Little House of Jello" and "I Am a Robot." Trubitt brings to life a Bugaloos playscape in "Flower Tower." "We're appealing to parents who are psyched to get back to the clubs and want to hear music they can connect to, and share with their children," explains Verlander. "Meanwhile, we (the band members) are rediscovering music through the ears of our kids." Their philosophy has clearly resonated with audiences of all ages. Hailed by the San Francisco Chronicle as "every parent's favorite kid rock band and quite possibly the illegitimate offspring of The Cat in the Hat and Joey Ramone," the Cups have been selling out hip clubs and concert halls, and doing brisk business on iTunes and CDBaby. 'Magic Toast' recently hit the top ten charts on XM Kids Radio. As Nolan sees it, "Basically, we're providing a service to parents whose lighters may be a little rusty, but they still have a spark."

Here's what you say about
The Sippy Cups - Electric Storyland.