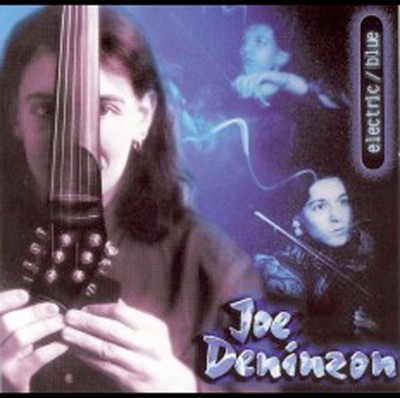 Joe Deninzon is a violin virtuoso from New York who has been called 'The Jimi Hendrix of the Violin'. He has worked as a sideman with a diverse roster of artists like Ritchie Blackmore from Deep Purple, Sheryl Crow, Phoebe Snow, Smoky Robinson, The Mahavishnu Project, Project Object, and the Trans-Siberian Orchestra among others. He also leads his fusion/funk band, STRATOSPHEERIUS. The group has been heavily involved in the jam band scene, performing regularly at clubs like the Bitter End and the Knitting Factory in New York, as well as touring the East Coast and Midwest. They were recent winners of Inside Connection Magazine's New music Showcase Competition, and have shared bills with John Scofield, Ekoostik Hookah, Mike Stern, Project/Object, Ulu, Sleigho, The Slip, and more. 'Electric Blue' was Joe's debut CD, released in 1998 on Wilbert's Blues Records. The disc was recorded in Joe's hometown of Cleveland before he moved to New York. The music takes it's influences from 60's/70's era Miles Davis, Jean-Luc Ponty, Frank Zappa, and Jeff Beck. From the abstract expressionism of 'Acid Rabbits' and ' Dark Frontier,' to the hard-hitting wah wah fiddlefusion of 'Shock Therapy' and 'Bluzak', to the mellow flavors of 'Oasis' and 'Evening Nap', Deninzon explores the innovative possibilities of the electric violin and takes the listener on a journey spanning many worlds.

Here's what you say about
Joe Deninzon - Electric Blue.