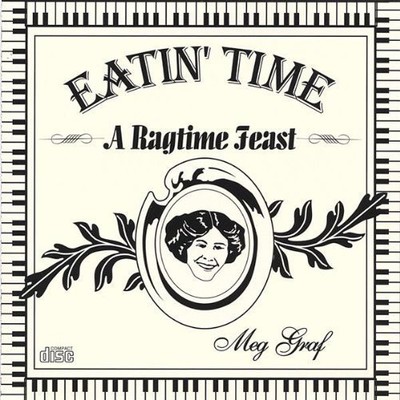 I got the idea for 'Eatin' Time' while recording another album: 'Cookin' with Calamity,' released by Calamity Jazz. That album features 'Sugar,' 'There ain't no Sweet Man worth the Salt of my Tears,' and 'Hot Tamale Man.' I had just learned Irene Cozad's ragtime composition titled 'Eatin' Time,' and began noticing the many tunes with food as their theme. The 22 tunes on this album are about food, and I found many more, so if I ever want to issue a second volume with a food theme, there is no lack of material! On the album, you will hear piano on all the tracks: that's me. You will also hear, on some tracks, bass sax, flute, piccolo, and fiddle -- not all the time, and not the same combination on every tune. That's me, too, thanks to recording technology! 'Pineapple Rag' is a 2-piano, 4-hands duet played by Lorraine Wadsworth and me. Dixieland jazz enthusiasts will recognize Lorraine as the mother of Scott Wadsworth, trombone-playing boy wonder of the former Jazz Minors. 'Sweet Pickles' features Vicki Cox on trumpet, and you will hear her washboard antics on 'Chicken Chowder' and 'Wild Cherries.' Vicki Cox leads 'Calamity Jazz,' a Dixieland band based in Eugene, Oregon, and plays trumpet for Oregon Jazz Band. Why a ragtime album? I am fascinated by this music for it's evocative, creative, expressive strains. The composers came from all walks of life: music teachers, medical students, circus clowns, conservatory professors, concert musicians, vaudeville performers, street musicians, sheltered young ladies, song-and-dance men... The music knew no racial or gender barriers, and it's history is multifaceted and thought-provoking. Ragtime's heydey was 1890-1930, and is unique to this country. While many ragtime performers are pianists, the genre celebrated music as a social activity, and was performed by ensembles of widely varying instrumentation. The music was played by harp and fiddle, by mandolin bands, string bands, jug bands, string ensembles, orchestras large and small, banjo bands... I grew up playing classical and religious music, and now play many styles: ragtime, Dixieland, old- time country, folk, gospel, swing, big band... I am an avid researcher of ragtime, and delight in arranging tunes for whatever instrumentation is wanted.