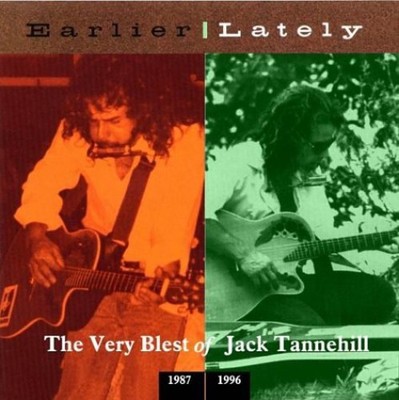 Jack Tannehill is a unique singer/songwriter with a unique way of writing songs, of looking at the world and of expressing himself. He also possesses a signature honey 'n gravel voice that sets him apart from anyone else you've ever heard and which also adds credence to his lyrics and to the passion of his vocals. If you like Bob Dylan, Steve Forbert, Neil Young and similar artists you no doubt will find the original sound of Jack Tannehill to your liking as well. Jack plays at local gigs in the Northwest New Jersey area, occassionally crossing state lines into neighboring Pennsylvania and New York. Though coming close to a record deal it somehow has alluded this talented artist. Would he still accept a deal today? Of course that all would probably depend on the deal. A publishing deal would be of great interest. Jack has some fine songs that could cross into different genres. Songs that have already been at the top of some music site charts. Jack's song, MAKE IT EASY, in fact won first place in a song contest sponsored by MakeAStar.com Praised by other songwriters... To Jack's credit other singer/songwriters praise his abilities: Eddy Free says 'I am so blown away. You reach down deep and pour it out. I am very moved.' William Kitchens an accomplished songwriter wrote: 'Man...I don't write too many artists. I was just checking some stuff out from some people who had my stuff on their stations [referring to the now defunct mp3.com stations] and found your stuff. Anyway, I'm listening to your music (stuff) right now and feel like music is OK again. Thanks for being!' Singer/songwriter & critic, Serena Matthews, says, 'I can't remember the last time I have felt so high listening to a song. Your talent bedazzles me. How could I never have heard of you before?? It's an injustice to the world that more people don't know about you. Influences... Among Jack's influences we could mention Hank Williams Sr., Jim Croce, Neil Young, Bruce Springsteen, Bob Seger, Steve Forbert and others. Does Jack sound like any of these -- NO! Although some say he sounds like Steve Forbert for whom Jack has opened a number of times. Band History: Jack has been around for a while. His first album was released on vinyl with his partner Brad Jarvis in 1987and was called 'Tannehill-Jarvis'. EARLIER LATELY, THE VERY BLEST OF JACK TANNEHILL features 7 tracks from that first album plus 10 tracks recorded in 1996 and one bonus track recorded in 1997. In 1995 Jack released his first independent solo album on CD titled 'GREATEST HINTS' The Newark Star Ledger featured a review of this album by Jay Lustig. Jay said in that review: 'Painfully honest lines appear in virtually every song, making GREATEST HINTS an album that grabs a listeners attention. Equally important though is Tannehill's voice. He is in his 30's but he sounds twice as old singing in a weathered rasp that adds weight to his stories. Jack Tannehill's new album is full of 'strikingly candid sentiments'. Judging by this album, Tannehill truly deserves to go further with his solo endeavors' In addition to GREATEST HINTS, Jack also has EARLIER LATELY, THE VERY BLEST OF JACK TANNEHILL and INTRODUCING JACK TANNEHILL also available on CD. A fourth CD is in the planning stages. Jack can also be found on numerous compilation CDs including THINKING ABOUT BOB DYLAN which features 5 other singer/songwriters and Jack with each performing one Bob Dylan song and one song of their own. [THINKING ABOUT BOB DYLAN is available at CD Baby.]