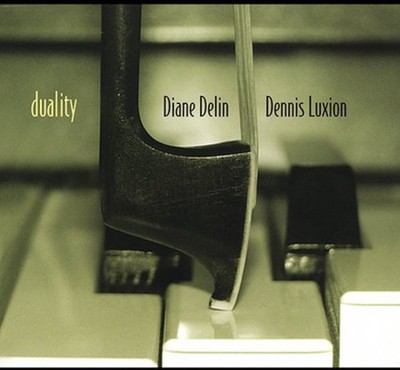 Diane Delin is a jazz violinist, composer, recording artist and educator. She has four times been voted a "Rising Star" by Downbeat Magazine's Critic's Poll (2009, 2008, 2007 & 2005), and has received such comments as: "Her elegance and expertise are always obvious," from JazzTimes Magazine, while the LA Times prints, "Delin produces improvisations of considerable style and unmistakable integrity." St. Louis' Sheldon Concert Hall gives her "Standing Ovation!" while the Chicago Sun-Times remarks, "Her playing has a toughness and stringency to go with it's elegance and verve," and Boston's jazz critic Fred Bouchard adds, "She's really a fine player with exquisite taste." Diane's recent performances have included a range from the Sunset-Sunside in Paris to St. Louis' Sheldon Concert Hall, Jazz Ahead in Bremen, Germany to New Orlean's Snug Harbor to Chicago's Jazz Showcase, the Kingston New York Jazz Festival to Chicago's Symphony Center to Chicago's WTTW PBS Centerstage Live Broadcast, Taste of Chicago to Portland, IN Performing Arts Series, in addition to being booked in Weil Hall at Carnegie Hall in December 2007. She has played for President Clinton, the First Lady Hillary Clinton, (then Senator) Barack Obama, as well as many other dignitaries. Diane has five recordings on the Blujazz label, all of which have received extensive international airplay with the last four settling on the U.S. national jazz charts. She has received favorable reviews and feature articles in Downbeat Magazine, JazzTimes Magazine, Cadence Magazine, the LA Times, Jazz Improv magazine (as well as Jazz Improv New York), Chicago Tribune, Chicago Sun-Times, Chicago Reader, Jazz Now Magazine, Jazz Review, St. Louis Post Dispatch, St. Louis Riverfront Times, All About Jazz, Jazz Views United Kingdom, Vocero De Puerto Rico, Jazz Institute of Chicago's Jazz Gram, Chicago Jazz Magazine, the All Music Guide, Sounds of Timeless Jazz, New City Chicago, Rockford Register Star, Pioneer Press, New Orleans Times Picayune, State Journal Register, the Chicago Musicians' Union Intermezzo, among many others. She has also been among musicians on the cover of an issue of Jazziz Magazine featuring women in jazz, has been asked by Jazz Improv Magazine to contribute an article on amplifiers, and has even been sighted as a clue in United Airlines in-flight magazine Hemisphere's crossword puzzle. Diane also presents clinics, master classes and residencies. Her participatory educational program, "Jazz Talk," has been presented to thousands of students, giving them an overview of the evolution of jazz and encouraging them to improvise with the group. She also leads clinics for educators. Her concert, festival and clinic appearances in the Midwest United States, have been supported by the Illinois Arts Council's Arts Tour program since 1991. Diane grew up in Evanston, IL, a suburb bordering Chicago's north side. She was 6 when she began studying piano, and began violin at age 9. Her first violin teacher was Samuel Aaron. She attended Evanston Township High School where she became concert master of the orchestra and performed the Bruch Violin Concerto with the orchestra in her senior year. She later studied jazz with saxophonist Joe Daley, and earned a bachelor's degree in music performance at Northwestern University (studying classically with Edgar Muenzer of the Chicago Symphony), and a masters in community arts management from the University of Illinois "for survival techniques" in the music world. Although Diane's jazz interest was first piqued by violinists-Stuff Smith, Joe Venuti and country-swing violinist Vassar Clements, it was the Bill Evans Village Vanguard sessions that most inspired her to play jazz. In addition to touring and recording with her own groups, Diane also does creative and commercial session work, including production and arranging. The most recent recording she has produced, Dee Alexander's 'Wild is the Wind' (Blujazz), received a 5 star review from Downbeat Magazine. As a "sideman" she has toured as part of the string section in the Frank Sinatra Orchestra from 1991-94, and has been a section player for a wide range of artists such as Manhattan Transfer, Ray Charles, Brian Wilson, Garth Brooks, Smokey Robinson, Gladys Knight, and many others. Diane is also a member of and former governor of the board of the Midwest chapter of The Recording Academy (NARAS), and a member of the Chicago Local of the American Federation of Musicians. She currently teaches in the jazz studies program at Columbia College in Chicago, IL.

Here's what you say about
Diane Delin - Duality.