Starch Martins - Dressing Up the Failure 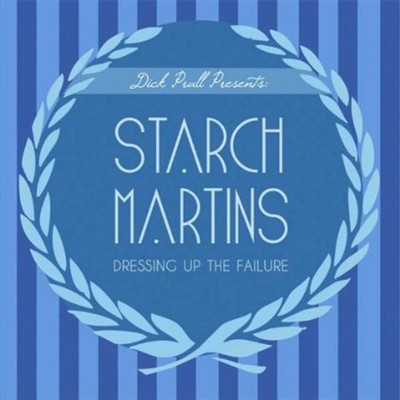 Dodging in and out of pop ditties, lilting melodies, and quirky song structures, Dick Prall's inability to stay in one musical place is reflective in a body of work that mirrors his personality: youthfully distracted and sweetly cynical. He puts great care into fashioning accessible and viral songs, inserting them with content that, if you look beyond the hooks, shows you a landscape filled with unsavory characters, undesirable behavior, frustrating ambivalence, and a decent dose of thoughtfulness. You could label him a storyteller-one who leaves you happily singing along to tales of serial murder and roadside sex long after you've tucked away your ear buds. Prall hit the ground running with his first full-length, Somewhere About Here - dubbed "a track-by-track monster" by No Depression magazine. The follow-up, Dressing Up the Failure, under his alternative moniker Starch Martins, opened the door to national performances with renowned artists such as Jon Brion, Mike Doughty, Bobby Bare, Jr., Glen Phillips, and Justin Townes Earle. Dressing also received critical acclaim by many media outlets, including the Chicago Sun-Times who praised Prall for achieving "a brand of rootsy power-pop that is smart, introspective and filled with great hooks." His next album, the eclectic Fizzlebuzzie, prompted Performing Songwriter magazine to call the diverse record "a box of chocolates for your ears" and earned him a featured spot on NME.com. He upped the ante with the release of the beautifully infectious Weightless, and with it's single "The Cornflakes Song," garnered more radio spins across the country, a coveted spot on Paste Magazine's CD compilation, and airplay in the Starbucks national chain. Now poised to self-release two EPs within the span of only a few months - Fall 2010 and Spring 2011 - Prall is not only songwriter and performer, but has taken on the role of producer, as well. The first EP, simply titled Inc., contains five songs that fuse lush vocals, straight-forward guitars, hypnotic drums, and sugary-affected strings with undeniably catchy-as-hell melodies, accumulating into a powerhouse of oddly pop-fueled gems. Throughout his career you never know what Dick Prall will offer up, but you're assured that he's serious about the craft of writing songs. He's stuck with this because he has to - it's a DNA thing. And let's hope that DNA is generously mixed into the next batch of songs that come to light next spring. If he can keep up the pace of releasing EPs every few months as he's intending, and they're anywhere near the quality of his previous records, then every season will be a welcome change.

Here's what you say about
Starch Martins - Dressing Up the Failure.